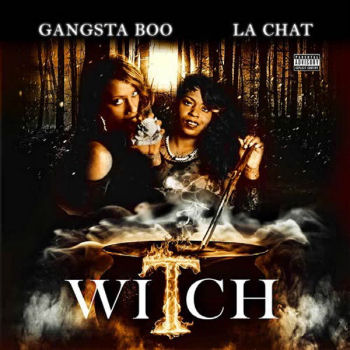 Gangsta Boo and La Chat received recognition through their affiliation with Three 6 Mafia and have achieved a modicum of success as soloists as a result. No one could go as far as to claim they're household names like Iggy Azalea or Nicki Minaj, but given the sizable reach of Da Mafia, just being known as a friend or affiliate can carry you a long way. Boo in particular can claim to have achieved chart-topping success with her single "Where Dem Dollas At" though it's worth nothing that was 16 years ago - time flies fast.

If what I'm about to say comes as deja vu I apologize in advance, but it turns out Gangsta Boo is no longer considered part of Da Mafia family. Every time we receive an album from a Mafia member or affiliate it seems to coincide with a change in their status or relationship with the group. I don't know that they plan it that way - I certainly don't. Given La Chat was even more loosely affiliated than Boo (her most famous appearance was on Project Pat's hit single "Chickenhead") the connection either of them have to the Mafia on the album "Witch" can be drawn directly through Lil Wyte making a cameo on the album. Wyte seems to be able to consistently keep a door open between himself and Da Mafia, and neither Boo nor Da Mafia have badmouthed each other, so we'll just leave it at that.

Getting back to that cameo appearance though, "On That" is produced by Drumma Boy, so thanks to that and Wyte's cameo it's one of the strongest of this album's 11 tracks. The rest of the CD? That depends on how much you were a fan of either of these women to begin with. Good points - they are unapologetically gangsterish and not overtly using sex to sell themselves. There's not a lot of other women rapping who will drop songs like "Sweet Robbery" bragging "When you see the guns, pussy nigga lay it down." Are they hardcore? Absolutely. Their raps benefit from equally hard beats. Drumma Boy produces both of the aforementioned tracks along with "Buss It" and "Till the Day." For some people it will simply be a novelty to hear women rapping "Y'all bitches ain't no killers/y'all bitches some hoes" but this is not a gimmick - both have been Memphis certified since the late 1990's.

The flip side of this coin is that without some pounding beats to keep your interest, there's a dearth of compelling reasons to invest in the lyrical stylings of Boo or Chat. As writers they range from mediocre to competent. "Every nigga that I fuck with, I put him on the X/yeah my ex, he still blow me up, tryin to give me neck/What the heck? Shit I'm high, plus, he do it the best." It's not exactly a profound personal statement that gets us to a deeper level of connection - hell it's not even cheap tawdry dimestore novel pulp fiction. "Till the Day" without Drumma Boy's production would be a subpar rap song, and even with it the lyricism rises to average. While Nicki Minaj's critics will say she's overly sexual and promotes an unrealistic body image, they won't say she's afraid to get personal in her raps or that she doesn't have a good flow. Chat and Boo have a competent flow - like their lyrics it's simple and effective but not mesmerizing or mind-blowing.

In sticking to their wheelhouse of hardcore topics, La Chat and Gangsta Boo maximize their strengths while mostly covering their weaknesses. They prove to be better together than apart, tag teaming comfortable topics like "Frenemies" and declaring themselves hip-hop's "Thelma & Louise." The end result is that "Witch" isn't a terrible album - it's just not an important one. To whatever fans they have inside or outside of their Mafia circles this won't disappoint - and to the rest it's not something that needs to be a priority in 2014.