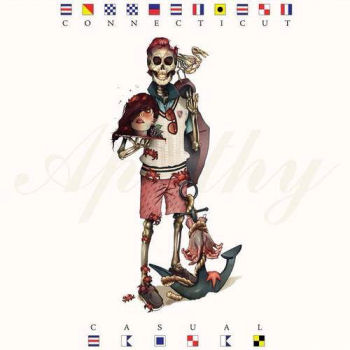 As an elite emcee, Apathy has spent much of his career bodying beats through his regular appearances alongside partner-in-rhyme Celph Titled, or as a reliably destructive member of Army of the Pharaohs. Given that AOTP is Vinnie Paz's group that grew from the Jedi Mind Tricks brand of uber-violence and intense macho-ness, Apathy's style of wrapping his so-called alien tongue around words has always suited more minimal production. His own group The Demigodz delivered a refreshing take on throwback hip hop in 2013 with "Killmatic", a polished collection of posse cuts which never felt like a bunch of verses tacked together - something AOTP records have now become.

While Apathy's tendency to use "battle rhymes" is apparent, his solo albums are actually his best work. "Eastern Philosophy" was a self-indulgent ode to the New York artists he clearly admired as a teenager, but also sounded like a modern advancement on the traditional sound guys like Black Moon and Cella Dwellas perfected. It was the best of both worlds, old and new. Fast-forward to 2011's "Honkey Kong" (arguably his best work) and the self-confessed mother molester is working alongside the same guys who crafted classics twenty years earlier. DJ Premier, Da Beatminerz and DJ Muggs ensured fiery hot rhymes were met with equally scorching instrumentals, so to see a self-produced album from Apathy is a brave move.

I'll give Apathy his props for trying something different, something that tries to be more grown-up but "Connecticut Casual" ends up being rather convoluted. There's certainly a focus on his hometown and some political themes, but it also feels like a bad homecoming. He's as intricate as ever with the rhymes, but there's a noticeable tendency to focus on themes I thought he had outgrown - "Underground Chick" is as tightly flown as anything Ap has done, but suffers from tedious misogyny harking back to the immaturity of early Apathy songs like "DSLs" and "Earth Girls Are Easy". He's just as vulgar on "Locals Only" showing further proof of an obsession with fellatio, although the impeccable and precise technique with which Apathy writes and delivers his rhymes is admittedly as impressive as ever.

Production is handled by Apathy himself, and is solid if unremarkable. The minimalist production on the intro track "Connecticut Casual" is how I hoped the rest of the album sounded, as it gives Apathy a great platform to share his childhood experiences on, to provide a scene-setting moment for those of us not clued up on Connecticut. While the likes of "Jack Ruby" stand out above all other tracks - much of the album is let down by Apathy's reluctance to open up fully.

There's an 80s rock-pop feel to much of the album, showing influences of Apathy's background and musical taste before he jumped in to hip hop with both feet. It works on the heavy-hitting "Grand Leveler" and the George Michael-sampled "Martha Moxley (Rest In Peace)" but has mixed results elsewhere. The problem that stops either of those tracks from piquing interest is they both end up sounding like predictable Apathy verses. He's talking about creating pyramids, travelling through dungeons and god damned nebulas. It's stagnant material that feels lazy when you've heard classics like "The Buck Stops Here" or "The Winter". This album is the song "Immortal" multiplied and elaborated upon - and that song was my favourite Apathy joint for YEARS, but the novelty of rapping to Queen wears thin eventually.

As much as I enjoyed hearing Apathy take his production in to a different direction (all while keeping the album cohesive), I can't understand the hollow nature to the rhyming. It's like listening to "It's The Bootleg, Muthafuckaz! Volume 1" with different beats, or a Canibus album with good production. When ignoring the compilations, Apathy is one of hip hop's most reliable emcees, gifting us "Eastern Philosophy", "Honkey Kong" and The Demigodz' "Killmatic" - all three I recommend picking up. "Connecticut Casual" is a deviation that didn't seem necessary, particularly when it draws on Apathy's worst traits - misogyny and science fiction. It's clear Apathy has focussed on where he is from with this album and gives fellow Connecticut residents Chris Webby and Kappa Gamma an opportunity to reach a wider audience, but listeners won't really know Apathy any more than they already do after hearing this record. Perhaps I was expecting something else, something more personal and introspective. Even a bunch of cuts akin to "Peace Connecticut" from "Honkey Kong" would have gone down a treat. But what we're left with is some interesting, experimental production that is decidedly hit and miss, and largely unremarkable verses from Apathy, at least from a thematic perspective.