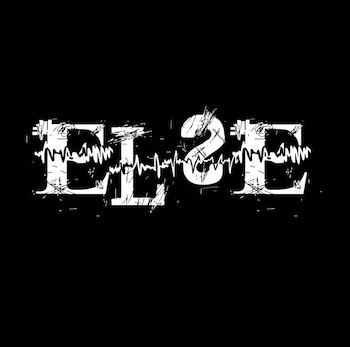 It took me a minute to figure it out. They slowed the beat down. They changed the pitch. Neither man involved in the track is named "Nice" or "B." I thought about it for a minute though - literally 60 seconds - and it came to me in an instant. "I got a funky funky rhyme with a funky funky style." Crafty & Dkay either did it by accident or on purpose but either way the opening track of their album "Else" is like a chopped 'n screwed version of "Hip-Hop Junkies."

I was first introduced to the Boston-based Crafty back in 2011, and though I gave him some shit about putting his answering machine on his album, I'm glad to be hearing from him again. Crafty showed some undeveloped potential that I rated as "solid (but) not spectacular" which could over time grow to being a better emcee. For the aspiring rap star the solution turned out to be forming a partnership with Dkay, which allowed him to split up the lyrical duties, and also gave him the flexibility to assume a greater role in overseeing the mastering and production of "Else." Dkay isn't the only one to make a contribution here. AlexKidOne and Peptalk produce a track apiece, and three guest stars work their way into the mix over an hour of beats and rhymes. "Blam" implies violence in its name and sample but is a relaxed cipher of bars with Exact Dose measuring out a precise contribution. "Same Old, Same Old" featuring Prophet opens with a diatribe that seems as much a message to Crafty as the listener - "do whatever you can for yo' life to be the shit." Finally the Mobb Deeply named "Hell On Earth" features Organismmic, which reads like it's a clever mixture of "organism" and "orgasmic" but is just incredibly awkward to say out loud. Change your name homey - but don't change your style. The majority of the album is produced by Crafty, including all three of the tracks mentioned in the last paragraph, and I think it's fair to say this may be the area Crafty excels at the most. Tracks like "Unbroken" and "We Are" qualify as headnodders - you'll bob to the beats before you even realize you've done it. Last time around I felt that Crafty lacked "exuberance" in his rhymes but by splitting the microphone duties and focusing on the beats the whole presentation has been elevated. I'm not encouraging Crafty to abandon the craft of emceeing altogether, but my impression is that he'll make the maximum impact on hip-hop as a producer. Still if he's going to rap I can safely say nothing on "Else" left me thinking "Why bother?" There's a standard amount of bravado and posturing but nothing that rises to a silly or childish level, and given his Boston/East coast background there's a solid (dare I say) underground independent imprint vibe focused on beats and rhymes. If the late great Biscuithead Records were still open I'd tell you to go there and pick up a copy.