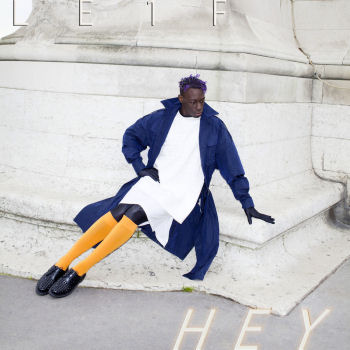 Of all the people throwing shade and firing shots at Macklemore, New York rapper Le1f had perhaps the most legitimate beef. As he put it in a tweet that has since been deleted, "that time that straight white dude ripped off my song then made a video about gay interracial love and made a million dollars."

The song he is referring to is Macklemore and Ryan Lewis's "Thrift Shop," which came out in August 2012, and features horn stabs that sound awfully similar to those in Le1f's single "Wut," which came out in April 2012. Really similar. As in "call your lawyer" similar. I'm not accusing anyone of anything, but Le1f definitely has a case. Le1f was equally upset about all the media attention (and money) Macklemore and Lewis got for their pro-gay track "Same Love," when gay rappers weren't getting any attention from the media. I haven't listened to Le1f's EP or his three mixtapes, so I figured his new EP "Hey" was an opportunity to catch up with the rapper, see what he has to offer, and see if he deserves a share of Macklemore's market.

Lyrically and sonically Le1f has a lot in common with the latest generation of club rappers who rap about getting high and getting laid over electronic beats. The whistling synths and handclap beats on opener "Hey" are straight out of the post-hyphy Bay Area. The lyrics could almost be from Sage the Gemini, except for all the references to bubble butts. It's raunchy sex rap with a twist, including using eating Mexican food as a metaphor for sex:

"You can call me carnitas because my meat is the sweetest
I got you sweating the peppers and want to ruffle my feathers
I see you catching the vapors yo Ima vape with you later
Spill your beans like burritos lick your fingers like Fritos
I'm that new pretty flaco
Making you eat the whole taco
And you can lick my toes too
Shit is low fat, tofu"

He keeps up the raunch factor on "Wut," which continues on the theme of how much Le1f likes to screw:

"You ain't giving it enough
I need my Oreo's double stuffed
Ukrainian cutie
He really wanna cuddle
The fever in his eyes
He wanna suckle on my muscle
He wanna burst my bubble and see what's up in my jungle
A Christopher Colombo fumble's how that cookie crumbled
This yuppie's talking blah blah
He wants to Bink my Jar Jar
He's twinked out
I'm like nuh uh
I'm laughing at them like 'ha ha'
I'm an emperor
Wanna see me in my new clothes?
Mother of the house
Care to see me in a new pose?"

Even though "Wut" is the millionth rap song about getting laid, there's something revolutionary about hearing a male rapper spit bars about fucking other dudes. Gay sex has always been the ultimate rap insult, so to hear a rapper embrace it is jarring and refreshing at the same time. It's the ultimate middle finger to homophobia. It's also interesting to hear a guy rap about sex without any of the misogyny or macho bullshit that often pervades hip-hop. Not that Le1f gives the impression that he cares deeply for any of his conquests, but there isn't the same derision and disrespect that you sometimes get when rappers talk about women.

The problem is Le1f's lyrical subject matter is much more interesting and impressive than his musical ability. The novelty of Le1f being gay obscures his mediocre talent as a rapper. It's great that a rapper can drop lines like "I'm a man's man…literally" and rap about picking up hot dudes, but at the end of the day he's not a great rapper. He has an exaggerated, affected flow, drawing out his vowels in a way that sounds like someone making fun of how rich people talk. And if you take away the shout-outs to the LGBT community and pronouns of Le1f's conquests, you are left with yet another club rap album about getting high and getting laid. It's hard to get excited about. Not that "Hey" is a bad EP, but it's nothing special. Ultimately it's probably Le1f's average music more than his sexuality that explains why he isn't making that Macklemore dough. That and the fact that soccer moms don't tend to go for songs about shrimping.