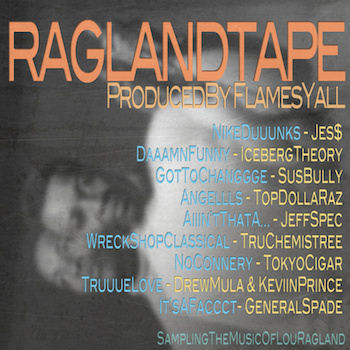 Lou Ragland isn't well enough known or regarded to have his own Wikipedia page, which may be the very reason that UK producer FlamesYall decided to create a "RaglandTape" celebrating his catalogue. There's certainly no shortage of material for him to flip - the singer and guitarist has been releasing music since the late 1950's. He's made it all the way up to the mainstream on more than one occasion, including Warner Brothers releasing his single "Since You Said You'd be Mine" in 1973. It's a charming bit of Motown-esque R&B that fits in comfortably between the Jackson 5 and the Temptations.

For reasons that are unclear to me, Ragland's discography is all over the map, working with a over a half dozen different labels on his own - and undoubtedly far more as a session musician or backing vocalist. It may be that Ragland's lack of notoriety these days is entirely his own doing, never staying anywhere long enough to build a legacy, condemned by his own wanderlust to be well sampled as opposed to well known. That being said you can't help but bop your head to what FlamesYall has put together on "RaglandTape" - not just the loops he chose but the rappers he chose to work with like TopDollaRaz. Even though Flames is UK based, he's reached out across the pond to work with foreign emcees, although I'm very partial to the local accent of SusBully on "GotToChanggge." He's unapologetic about his circumstances, "Forced to shit that was embarrassing - working for that chump change for my kid's sake ... supermarkets, no money for the big steaks." Between the beats and the rhymes it's easy to relate and feel where the 'Backyard Bully' is coming from, but it's just as easy to feel Jeff Spec on "Aiiin'ThatA (Bitch)" as he drops bar after bar of aggressive punchline over soulfully crooned "ooooooooohs" worthy of Otis Redding. I searched hard for something to dislike about "RaglandTape," but the strongest complaint I have is that it advocates for a little known R&B/soul musician without really telling us anything about him. Given Ragland lacks a Wikipedia page, I think the least that Flames could do (y'all) is give us a bio for him that he wrote himself. He clearly respects Ragland's body of work enough to make hot beats out of it, and whether it's the gangsterish "DaaamnFunny" featuring Iceberg Theory or the humorous "No Connery" with Tokyo Cigar, it's obvious that Ragland can be flipped to fit any style - and Flames is hot enough to work that grill. Flip on Flames - broil 'em!