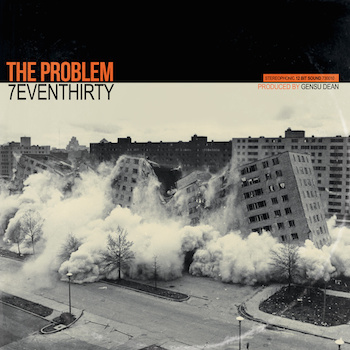 Gensu Dean produced this album. That one fact alone made 7evenThirty's "The Problem" worth the price of admission for me. The reasons to invest only increase knowing the release comes from the Mello Music Group camp. As a rule MMG doesn't tend to release whack shit - they may have a rare dud here or there but they set a reliably high standard for independent hip-hop. I imagine a lot of today's audience sees "MMG" and thinks "Maybach Music Group" and/or Rick Ross - not me.

7evenThirty is certainly not the "Mello" in MMG though. Before you've even finished the second track "Roach Spray" he's bragged that he's "A one-man zombie apocalypse/T-virus positive/I'm positive I'm never coming to your open mic night" and "something like Bruce Banner pulling up on that motorbike." 7even is Dallas, Texas by way of Jackson, Mississippi and the accent would tell you that even without a bio or this review - he says "hell" like you're in a "hail" storm. That's fine by me - let it rain - he's the authentic concoction and not an Australian imitation. 7even is what Snoop Dogg would sound like if his parents never moved to Long Beach.

Speaking of bios the MMG one accompanying "The Problem" states that Gensu Dean and 7evenThirty were "fated" to work together due to "shared soil written in indelible ink." I'm hard pressed to argue after 42 minutes of this album - Dean is definitely 7even's Dr. Dre. You can speculate for a fortnight on whether 7even wrote the raps and Dean crafted the beats to match or vice versa - and ultimately it doesn't matter. The two are ideally met on each track. 7even gets personal on "Better Give 'Em Sumthin'" and the looped bass and light piano breathes the pain with him. "Making of a Vigilante" is appropriately menacing, finding 7even channeling the spirit of Kurupt. And then there's the brooding and aptly named "Hook Heavy" featuring Sean Price - a collaboration so natural that all parties involved may want to consider an EP together. Price sounds a little bitter when he raps "I'm not on Hot 97" but he's still a fan favorite spitting bars on a dope Gensu beat so life's not all that bad. I'd rather he be on hot 16's myself (but he still deserves to be paid like Jay Z). The problem with "The Problem" is Hot 97 though - or more generally speaking the fact that music this fresh can't find a spot on any radio dial other than satellite. It definitely deserves to be broadcast on hood radio though - roll down your car windows and blast it at high volume in a resedential district.