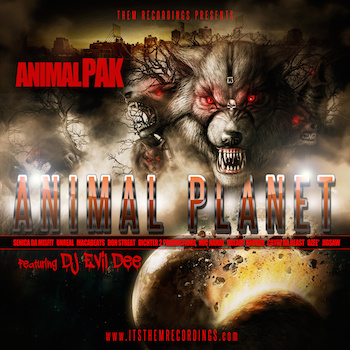 If you thought the rap supergroup concept was nearing the end of its lifespan, Animal PAK is here to assert that its not going anywhere. It's certainly one of the largest collectives we've seen put together in a while. Dready Kruger, Don Streat, Unreal, Mic Handz, Cayoz The Beast, Senica Da Misfit, Macabeats, Jigsaw, O*Zee and Dichter2Productions make up the official roster. Individually I've featured singles from more than a few on the RapReviews newsfeed but I couldn't track down a full album review in our database for any. The definition of a supergroup is usually that the artists were well established before they came together. Crooked I, Joell Ortiz, Joe Budden and Royce Da 5'9" all had solo albums on major labels before Slaughterhouse was established.

This isn't an impediment to the success of Animal PAK, but it doesn't have the immediate eye popping name power that you'd expect by reading the lineup. Production is definitely one of the strengths here. Cool FD laces "Quid Pro Quo," which sounds like The A-Team theme remixed on rap steroids. "Vietnam Kidz" featuring Kool G. Rap has that Noreaga style gritty New York sound courtesy These Handz, which may just be coincidence given this new group stretches from California to Maine. "Slow Burn" featuring Do It All also has that New York sound, but this one is more of a throwback to the 1980's - Biz Markie comes to mind. Either way it's fairly clear that the extra large crew is grounded in hip-hop and pop culture from the same era that I grew up in - or at least the producers are all 80's babies. There are songs that break the mold too. "Thorn of a Rose" is an eerie Hazernomical production that sounds like a church choir harmonizing hip-hop, and the minimalistic percussion gives it that extra edge. If Killah Priest had walked into the middle of the song and started spitting Biblical prophecies I wouldn't have been surprised. Cayoz The Beast takes his turn behind the boards on "Letras Liquidos," and the song name is a dead giveaway to the Spanish guitar loops that make up the tracks. This one might be the most bumpable of the whole album - the scratches (particularly Sadat X) on the hook take it up another notch. I want to hop in the whip and drive around with this one on full blast. The emcees sound amped up too. Though it may seem like I've dogged them out a bit for not having the kind of team that justifies being called a supergroup, the one advantage Animal PAK has by being so large is that no one emcee stands out as being the weak link - everybody comes in, spits their bars, and is Audi 5000. Thanks to the overall quality of the production and DJ Evil Dee playing the role of the host/presenter of the group, there are some strategic gains made by Animal PAK with "Animal Planet" that position them for a bigger following now and in the future. I wouldn't go as far as saying they're ready to be the next Wu-Tang Clan, but I'd suggest they're worth a listen.