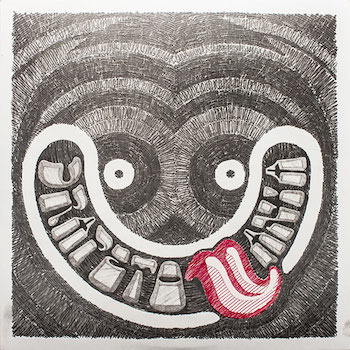 Over the past decade, and maybe even longer than that, underground hip hop has had a fascination with 90s-sounding hip hop - or what I like to call "Nostalgia Rap." Some acts, such as Joey Bada$$ and his Pro Era crew, have been able to effectively execute nostalgia rap, but most fall flat, revisiting tired tropes and sounds that come off derivative and unimaginative. The Green Seed, a four member crew from the Birmingham-based indie label Communicating Vessels, is definitely a Nostalgia Rap crew, and their album, "Drapetomania," is definitely stuck in the 90s but is still an enjoyable, head nodding record.

The Green Seed features two emcees (R-Tist and C.O.M.P.L.E.T.) and two DJs (DJ FX and Jeff C). Their sound reminds me a lot of throwback acts like Arrested Development and Jurassic 5. The Green Seed crafts a lot of excellent chant-like hooks throughout "Drapetomania" including standouts "Gotchoo" and "The Up Steps." The production, which is handled by R-Tist along with Jeffrey Cain and others, carries this album. There is a heavy 90s vibe, but the sound is more fleshed out and flourished than typical boom bap records. Tracks like the closer, "Town of Steal" uses both live instrumentation and samples. The first track, "Jude Law" is packed with energy and features horn chops that would impress Q-Tip.

R-Tist and C.O.M.P.L.E.T.'s talents are more focused on rhythm and flows than stand out lyricism. When these two emcees are at their best, they're trading bars back and forth, playing with flows and singing catchy hooks. Tracks like "The Up Steps" and "Jude Law" are the best examples of that. "Amigos" and "Is Where the Heart Is" are stand out cuts about love and friendship, that provide some insight but are still fun. "Drapetomania's" nadir track is "Diss Connect," which is about the ill effects social media and technology is having on human interaction. While I don't disagree with the message, the song itself comes off a bit preachy and corny (and in The Green Seed's defense, I've yet to hear a song about this subject matter that wasn't technophobic or altogether wack).

The Green Seed succeeds because the group sticks to the hip hop basics. Good production, good flows and raps, good cuts and memorable hooks. "Drapetomania" will do little to advance hip hop or show any progression in the genre, but it doesn't try to nor does it need to. It's fun Nostalgia Rap that doesn't try to be anything else.