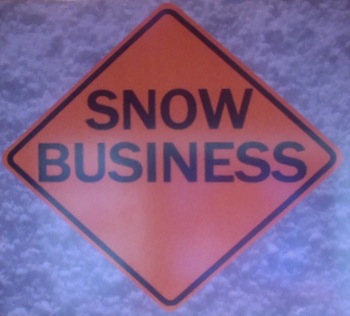 The most frustrating thing about Cleen for me is just how hard he is to Google search. "Are you sure you didn't mean Clean?" No, I didn't. His label imprint is worse. Try typing in "Western Manor" and it autocompletes as "best Western Manor hotel." If it weren't for the fact he lists his label's URL on the inner fold of "Snow Business" we wouldn't be able to link it correctly. You can find more hits by searching "Cleen" + "RapReviews" because we've reviewed a plethora of his previous albums here on the site. Even with a career spanning ten years, more than many fly-by-night rappers, he sounds positively bummed about it on "Reasons":

It may be that his reason this time around is that the entire album was produced by China White. Having a good partner to work with certainly lends you extra motivation, which is why I found his album with Elephant Gerald one of the best of his career. How does he fare with White? The results are mixed. "Smiley Face" was released as a single and video off "Snow Business" and there are both positives and negatives here.

Cleen sounds positively upbeat at points in this song - he's a little doom and gloom in the chorus ("I'm not gona win this race") but compared to "Reasons" he's actually optimistic about the future. "The Mayans were lyin I'm sorry to say/Nostradamus was wrong and so are they." China White is clearly capable of bringing out Cleen's best, but I'm not so sure the axiom works in reverse. White's beats are flat, tinny, and lack a hard hitting punch. When he stumbles across something that works just a little bit like "Ferris Wheel," it's still not the kind of song that you want to listen to on repeat, nod to on your headphones, or bump in your ride. White is technically sound as a producer. It's not as though the beats and rhymes are out of sync, or that the levels are not equalized and mixed properly between beats and rhymes, it's that the instrumentals are not interesting and occasionally awful. "Secret Knock" seems like a really bad cross between underground hip-hop and Southern bounce. "I'm Coming Back a Star" tries to crank up the bass and put a hot horn stab over it, but the two seem totally disconnected. "Too Many Tin Men" is a good effort with a decent piano melody, but when Cleen describes the beat as "bass drums slappin like two bitches in a cat fight" I have to respectfully disagree.

"Snow Business" almost works, almost half of the time, but that's just not enough. I dig Cleen in a lot of ways - he's a long suffering California emcee (straight outta Lancaster) who continues to grind on each and every album regardless of whether he'll even get FM or XM radio exposure. His flow is sound, he puts a lot of thought into his lyrics, and he's not throwing out a bunch of garbage "mixtapes" for free download just to keep his name in the limelight. Cleen is in every respect the kind of emcee I root for as a writer/reviewer but at the end of the day not every album can be a hit. China White has some good ideas that just don't click in execution, and no matter how clean Cleen's flow is, he can't make all of the beats work. I give it up for songs like "Rock & Roll" featuring Rhyme Village but out of 14 songs and nearly 50 minutes of music these moments don't come often enough. I know Cleen can do better.