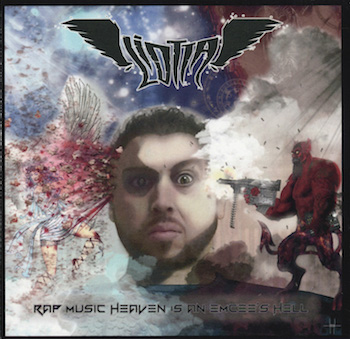 The mysterious Liotta only got more mysterious since we last checked in with him on "The Prequel." The Chicago based emcee seems to have lost his Twitter account to a man named Claudio - he only follows four people and one is the Pope. That makes the emcee even less searchable on social media than he already was, though Liotta's album still found its way to retailers - even CDBaby is offering it for sale. He's out there hustling and making moves with his album, but as the non-descript package I received in the mail proves, Liotta knows how to reach the masses when he wants to be heard.

One of my chief concerns about "The Prequel" was that 22 tracks and 80 minutes of music was just too much rap for (1.) a new and emerging artist with very little national exposure and (2.) an unproven style that could be better sampled in smaller doses. Thankfully it appears Liotta came to the same conclusion and pared "Rap Music Heaven" down to 14 tracks that clock in at just under an hour. The back cover (black font on a gray backdrop - kind of hard to read) delivers the essential information - "Produced, written, performed and mixed by Liotta." That means we can give him 100% of the praise or the blame, whichever happens to be the case. Let's start with praise - even though sampling "Crazy Train" is a little overdone by this point the grimy twist he gives it on "Jinx Proof" makes it work and guest Maximus doesn't minimize the music.

Regrettably I can't offer you an audio sample at this point - Liotta's Soundcloud account has ALSO disappeared and none of the tracks of "Rap Music Heaven" are available on YouTube. Sticking with the "praise" theme though, I'll salute "Rap Memoriez" as a track with Liotta going over his own personal history of getting into the music scene - complete with scratched in samples of Common saying "hip-hop." Getting personal is a good tack for the gruff Chicago emcee - it lets us know more about him than we can otherwise learn from the world wide web.

"Now I'm flowin on some thug shit quotable
The white kid vulnerable
Studying the protocol, the emcee totem pole
Idolize the beat, get a taste, never separate
All up in your face, watch me emulate and demonstrate
Cheap spokes, 15's in the boat
Whipper Street was the scene, you could see me approach
When Eclipse was the crew, St. Ides was the brew..."

Other quality tracks I'm unable to share with you right now - the guitar licks and thumping drums of "Alpha King," the haunting "My Baby Picture" where Liotta is jealous of his own childhood innocence, the echoing "downward spiral" of the track "Down We Go" and the aptly named second-to-last song "Closure." Friends slip in and out throughout the mix - Poe Pro on four tracks, the demonic sounding Buggzy Gunz on "Ryuken" and Marty Diggs on "Isopure" to name a few. Other than "Ryuken" and the aforementioned "Jinx Proof" I can't rate any of them as huge additions to the album, but they also aren't huge subtractions, so the balance sheet tends to even out.

The curious problem of Liotta is that he's improving as an artist even as he becomes harder to find. This time around his flow isn't quite so mechanical. At times he still seems to be forcing the words, but you're not left with the impression he's standing in front of a poetry class, eyes down, unable to look at his audience. On "Rap Music Heaven" you can actually picture him as the opening act for a rap tour that's coming through the Midwest, with a few fans in the audience who know his songs by heart, and some hand to hand album sales at the merch table after his set. I can see Liotta's commitment to improvement, I just can't see him online anywhere. He's got to be more visible if he wants to reach more people.