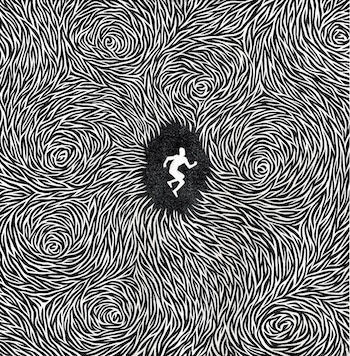 I spent more minutes trying to figure out what the cartoon drawing on Jister's website was than is strictly necessary for a review. Nevertheless I couldn't quite wrap my head around it. Is it a brony with a beard? A b-boy unicorn? A hipster horse who loves hip-hop? I really don't know.

Here's what I do know. Jister's "Absurdism" is produced by The Lion Ranger, which sounds a bit like The Lone Ranger if you say it with the right accent. Ranger hails from Leeds, while Jister is from Middlesbrough. The latter has been building up his name on the UK scene for the last five years, opening for and performing on bills with artists like Jehst, Devlin and Rizzle Kicks to name a few. To gain even larger exposure Jister is offering "Absurdism" at the name-your-own-price level - which means it's basically free for you cheapskates out there.

In the time it took me to pen those opening paragraphs I had already gone through the entire length of "Absurdism" once, which should tell you just how short this EP is. Perhaps that's why Jister is willing to give it out at whatever you'd pay for it. Most wrestling matches on a PPV last longer than "Absurdism" at 14 minutes - well unless your name is AJ Lee or Nikki Bella. The short length of the release or the songs is not a reflection on the quality - in fact the title track pulls me in with its atmospheric backdrop and Jister's pointed lyrics. "The world has been around, for a third of the universe/which we think is over 14 billion years/so that thing you're stressing over, chill and rejoice/cause in the best possible way - what is the point?"

Jister's English drawl is a little more pronounced than some of his countrymen, and I can honestly say it borders on being Scottish, which may just be typical of Northeast England given the proximity to Scotland. That may also be my misguided American ear hearing things that aren't there, but either way the drawn out vowels are highly pronounced on tracks like "Now That You." Words like "convert" become "KHAN-vert" and "slap" becomes "slop." Slop you in the face? That's what you might think if you weren't picking up the context. Jister is going to be a tough sell for some Yanks as a result, but at only 14 minutes long it's a short and enjoyable presentation. You can tell Jister has been working on his craft for a few years and didn't just start flowing yesterday. The Lion Ranger's tracks don't overpower the vocals, which makes Jister a little easier to follow despite the tough twist of his tongue. He's a storyteller who tells yarns that he claims are "Super Ridiculous," where in a Doctor Who style paradox he "got shot in the temple, but I came backwards with elegance/I'm investigating my own murder, looking for evidence." Jister could use a little more charisma at times, and the tracks are occasionally dry, but I can see the potential in "Absurdism" just waiting to surface. Keep an eye out for Jister in the future.