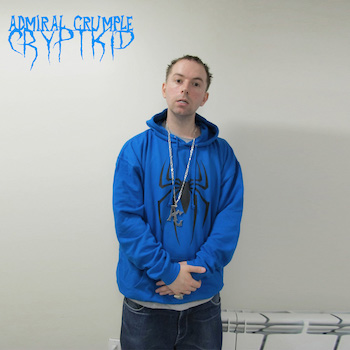 I have a grudging respect for Admiral Crumple, and not just because I dared him to include a backhanded compliment in his press next kit and he actually did it. No kidding - the last paragraph went out with copies of Crumple's latest album "Cryptkid." To use a phrase that was already out of date when I was Crumple's age, "The kid's got MOXIE." He's also one of the few rappers I know who is making references to Wanderlei Silva on his songs. Unfortunately for him Silva is banned for life from MMA competition in the United States for all intents and purposes (thanks to reciprocity between athletic commissions) but I still respect the science he drops on "Blue Carpet":

"More pen tips busy writing compositions
First things first like I sense a premonition
Wanderlei Silva will straight clobber them up!
He was training hard while they were smoking pot"

He even pronounces the W correctly like a "V" so you can tell he's not a Johnny-Come-Lately mixed martial arts fan (or was at least schooled by someone who knows the sport). He's got a lot of combat related lines in the song like "there's always a loser involved" and "that's the difference between a novice and an expert/I'll make your neck hurt." I can picture Admiral Crumple rolling on the mat at a jiu-jitsu school in Toronto, rolling with people in his age range and/or weight class, vowing that he's "Still Here" when foes are tapping out.

Now it's time for a compliment sandwich. Let's start with the positives - Crumple is definitely a better rapper than he was five years ago. The flow is tighter, he stays on beat on the "Cryptkid" tracks, and he gets props just for pulling double duty as both emcee and producer for all but two tracks. There's definitely a dark horrorcore appeal to Crumple, a rapper who brags "me and my crew will stick you with syringes" - not bothering to explain what might be in those dosages. Does he need to? No. Letting your imagination fill in the blanks actually makes the lyrics more effective.

The meat of this sandwich is less appealing than the bread though. If every single person who could breathe through their larynx and spit out words was pleasing to the ear, there would be an overabundance of hip-hop artists, R&B singers, country crooners and heavy metal hardrocks. The truth is that not everybody has a good voice, and a further limiting factor is that not everybody with a good voice knows how to use it. While Crumple has shown noticeable improvement in the latter category, the very sound of his voice is a limitation. With apologies he sounds like Cage before he hit puberty, and while his raps are better now than they were in the past, they're not Cage's level of ill. Not even close.

And now we finish this sandwich with a condiment and another compliment. Crumple is giving 10% of all albums sales on "Cryptkid" to the Covenant House in Toronto to help out troubled youth. As I'm in a gamer mood this week I'm really feeling "Poverty Street" - a good choice of Gauntlet samples and sound effects. Crumple's voice isn't necessarily one you want to listen to for over an hour, but in limited doses he achieves his goals on weird songs like "Screaming Buildings" - coming off like a more coherent version of Kool Keith's lyrical insanity (with less scatology). I like Crumple - he's a good "Cryptkid" - I'm just not sure his music is for everyone.