Professor Green :: Growing Up In Public 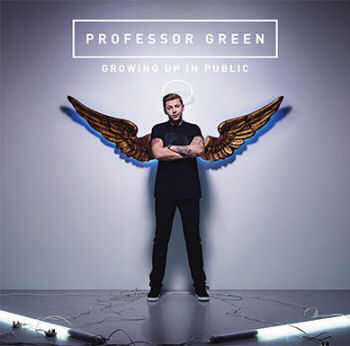 After completing the first spin of Professor Green's third album, I was sorely tempted to leave it at that, give it a shockingly low score, and basically slag Virgin Records off for about 600 words. Luckily, something told me to give it a few more listens - and whilst it's still a depressing album in too many respects, at least it's not AS bad as first feared. It's another cautionary tale of how UK labels just royally fuck up the careers of UK rappers, and let's just hope his deal is up, as a talented MC who also had crossover appeal is putting out utter tosh, and I bet that practically nobody is even buying "Growing Up In Public" either.

It's easy to forget but his debut "Alive Till I'm Dead" actually did pretty well - it was fun, energetic, had a couple of big hits and set him up nicely. Whilst hardly anyone (other than me, it seems) critically appreciated the sophomore ("At Your Inconvenience"), it still contained a mega-hit that got stripped for parts and turned into a Ferrari (the Emeli Sandé only "Read All About It" was the anthem of the entire London Olympics, sans Green). And so, the frequently delayed third effort was always going to struggle, especially after an artificially long gestation period (three years is somehow made to seem like three weeks, honestly).

So, here is your One Paragraph Summary: we get predictable rock-rap joints like "I Need Church" and "Dead Man's Shoes"; embarrassing skits involving Robbie Williams; abysmal jokes at other celebrity targets; saccharin singles like "Lullaby" (which retreads most of "Read All About It") and "Little Secrets"; getting outshone on your own song by the Rizzle Kicks ("Name In Lights"); ripping off The Streets' old shit ("Fast Life"); a surprisingly soulful joint that clearly ended up on the wrong album ("Not Your Man"); the sound of a rapper all but giving up ("Shadow of the Sun") and subsequently ruining dope instrumentals like the title track. And, the final insult: a bonus track that is actually fucking doper than pretty much anything else on the album ("Hugs and Kisses").

The tragedy of this album is the undeniable sound of a career getting treated with such contempt. Here's what they (Virgin) should have done: the record was never going to sell much anyway, despite chucking a lot of money at the wall and seeing what sticks. People aren't idiots, and how dare you treat hip hop fans as such. No, what you should have done was given Green some artistic freedom, connected him with some actual fucking hip hop producers, some talented grime acts, lit a fire under him and watched him burn up the tracks. In other words, let the talented hip hop MC make a fucking hip hop album, instead of half-hearted crossover attempts that nobody cares about: not the fans, not you and not him. Nobody. You would have spent about 10% of the budget, but got 10 times the respect. You can buy in some melodic choruses, but you can't polish a turd. Let him be great. Let Professor Green be himself. You've fundamentally failed your artist and his fans.