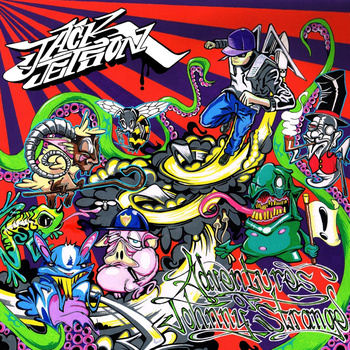 I generally associate UK hip-hop with music that strays from its U.S. origins. I think of trip-hop, grime, and other subgenres that combine electronic music and rapping. Then along comes Jack Jetson to blow that generalization. The heavily-tattooed Nottingham rapper makes boom-bap hip-hop that sounds straight out of NYC circa 1993. We're talking samples, loops, and drum machines, and rhymes about smoking dope and being a dope rhymer. If Jetson has heard of EDM, he thinks it is an illicit substance, and he'd be down for taking it.

Jetson is a rapper's rapper. His rhymes are built around clever and intricate rhymes that show off his skills. "Spit vitamins for people who ain't fitting in with other citizens," he raps on "Vitamins." "We play our minds like an instrument." On "8 Balls" he raps:

Jetson is backed on the album by producer Leaf Dog, who provides 13 cuts of old school beats. There are lots of snapping snares, soul samples, pianos and strings. What Leaf Dog lacks in originality, he makes up for in skill. The beats are well-executed, melodic and hard-hitting. The sound may be retro, but it is as comforting as apple pie.

While Leaf Dog's beats are good, there is a sameness to them, which isn't helped by Jetson's one-note delivery. Jetson raps about getting high and being good at rapping on track after track. Even though he's a "lyrical" rapper, there aren't really any stakes in his rhymes. After a few tracks you've heard everything he has to say, and then the rest of the album is just him saying it in slightly different ways. Its monotonous over the course of a 13 track album.

"The Adventures of Johnny Strange" doesn't break any new ground, but it does what it does well. Fans of old school hip-hop who miss the days when MCs were MCs and their producers used MPCs will want to check this out.