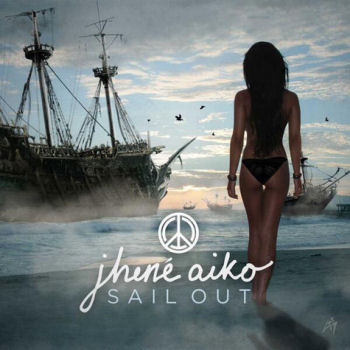 Although Jhene Aiko has been around for a while now (debuting back in 2002), her name sprung up on my radar when she started doing songs with Kendrick Lamar and Childish Gambino. I'm a sucker for a female R&B artist - probably the only white male in the world with the full Faith Evans discography, and there's no denying that Jhene Aiko is a key figure in the revival of R&B after having shaken its body to EDM for the past five years. Marsha Ambrosius, Daley and Tinashe dropped some cracking albums in the past 12 months, but this EP from Jhene Aiko was one that I have had in rotation constantly since it dropped in late 2013. It's an 8-track collection of collaborations with current hip hop heavyweights and a bunch of solo tracks aimed to hype the listener for the full length debut "Souled Out", which was released recently.

"Sail Out" lives up to its name, taking the listener on a floaty, dream-like journey through Jhene's life of sex, getting high and standard relationship issues. It's fantastic for falling asleep to in bed with your headphones on, and the thick bass and hypnotic production from Fisticuffs and No I.D. is fairly compared to Aaliyah's latter work. The crossover with hip hop is evident in that much of this record sounds like Drake's "Nothing Was The Same", but Jhene herself is reminiscent of Aaliyah's sultry, effortless brand of R&B.

The magnum opus of "Sail Out" is easily "Stay Ready (What a Life)", an epic collaboration with Kendrick Lamar that moves from a sensuous, predictable tale of seduction in to a moody, minimalist remix that feels like a head-spinning trip. It's not often a lady expresses her infatuation with marijuana on a song, but Jhene doesn't shy away from her habit throughout "Sail Out" and her production suits the sleepy, hallucinogenic quality of a good joint. "Bed Peace" is classier than the theme it follows - getting wasted on marijuana and struggling to get out of bed. We've all been there, and it's a nice change from sex-talk (because lie-ins always take precedence in the real world).

"3:16 a.m." isn't the time Stone Cold Steve Austin wakes up to take his pills, but another track that is perfect for playing at that time of night. It makes ideal background music, which although tends to be a backhanded complement, is part of the appeal. Seductive yet classy, in an alluring, big budget way, Jhene disguises the fact she's a mother incredibly well - her music is as fresh-faced and naughty as any of her contemporaries in the charts without ever feeling overly sexual.

"The Worst" throws the listener with its off-beat hook, but it somehow works and will drill its "I don't mean to, I don't mean to..." chant in to your subconscious. It doesn't hurt having some Phil Collins style drums to further confirm the nostalgic, night-time driving soundtrack feeling. I'm not surprised that "The Worst" is nominated for a Grammy (Best R&B Song) - and it's a testament to the quality of this EP that it is nominated as well (Best Urban Contemporary Album) ahead of Jhene's actual LP "Souled Out". Maybe it's a deadline thing, but from what I've heard of "Souled Out", this is the better listen. It's all so effortlessly addictive, and the fact that Jhene has a sultry, subtle vocal style means that she is very easy to listen to. Not every singer has to be hitting Mariah Carey notes. With critics drooling over the FKA Twigs "LP1" album, it's sad to see this EP go under the radar after being released at the end of 2013. Much like the fantastic "Those Who Wait EP" by Daley; there's been a mini-revival of retro-tinged R&B occurring at a time when the genre really needs it. The fact that this record features Ab-Soul, Kendrick Lamar, Childish Gambino and Vince Staples means it is worth checking out for hip hop fans anyway; that it's actually a brilliant listen makes it all the better.