D'Angelo and the Vanguard :: Black Messiah 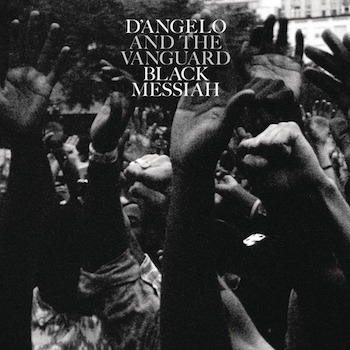 For a genre that is ostensibly all about getting down and getting it on, R&B has a significant amount of capital G Geniuses. Curtis Mayfield, Stevie Wonder, George Clinton, Sly Stone, and Prince are examples of R&B musicians who have taken the music far beyond its boundaries. Add to that list D'Angelo, the Virginia-born musician who is best known for his 2000 masterpiece "Voodoo." He's also known for basically dropping off the face of the earth after in the wake of that album (the story goes that at least part of the reason for his retreat from public life was how oversexualized he felt as an artist, and how much attention was given to his six-pack and model good looks vs. his music, in other words the same ish that every single female R&B singer has to put up with).

D'Angelo was supposed to drop an album with Prince in 2009, and every year since then has promised new work from him to no avail. He did release a few songs, played live a few times and even toured. Still, a new album from him seemed about as likely as a new album from Dr. Dre or "Madvillainy 2." And then, out of nowhere, "Black Messiah" drops.

The album was originally supposed to come out this year, but D'Angelo put it out in mid-December to coincide with the protests going on around the country and the world in the wake of the grand jury decisions on the Michael Brown and Eric Garner cases. In the liner notes he writes:

"It's about people rising up in Ferguson and in Egypt and in Occupy Wall Street and in every place where a community has had enough and decides to make change happen. It's not about praising one charismatic leader but celebrating thousands of themÉ"Black Messiah" is not one man. It's a feeling that, collectively, we are all that leader."

It's fitting that "Black Messiah" is meant to reflect the Ferguson protests, because the album is powerful and messy, and manages to convey anger, hope, and beauty, sometimes all at once. On my first two listens, I found myself wondering if there were any actual songs on the album. So much of it is texture that it takes a while to understand their shapes. This is an impressionistic album that is built around grooves rather than traditional pop songwriting. It makes "Black Messiah" a challenging record, which isn't something I expect from R&B.

The album starts off with a squall of feedback before going into the sloppy, tripped out Southern funk of "Ain't That Easy." "Take a toke of smoke from me as you dream inside," he sings. In another artist's hands, this might be a babymaking slow jam, but D'Angelo keeps things a little off. The song is a little shambling, the pieces not quite all fitting together. Even lyrically there is more going on than just a standard love song:

"Ever hit with a choice that you can't decide?
Which direction left or right?
Shut your mouth off and focus on what you feel inside
See y'all know I'ma go with my vibe
You won't believe all the things you have to sacrifice
Just to get peace of mind
And you take what they give as if it did suffice
Still it's just a waste of time"

The musical fury of "1000 Deaths" seems abated by the pretty ballad "The Charade." That is, until you actually listen to what D'Angelo is singing:

"Crawling through a systematic maze to demise
Pain in our eyes
Strain of drowning, wading through the lies
Degradation so loud that you can't hear the sound of our cries
All the dreamers have gone to the side of the road which we relay on
[...]
All we wanted was a chance to talk
instead we've only got outlined in chalk
Feet have bled a million miles we've walked
Revealing at the end of the day
The charade"

While there are some neo-soul and contemporary R&B elements in "Black Messiah," much of it is built on analog equipment and analog sounds. If you told me this was a lost 70s classic, I would believe you, even though it is full of hip-hop influences. It has the heaviness and intimacy of Sly Stone's "There's A Riot Goin' On," and it is hard not to compare the two albums. It's also hard not to hear Prince on "Black Messiah," especially in D'Angelo's voice and his willingness to mix rock in with his funk and soul. Even more impressive, it sounds like the D'Angelo record we've been waiting for for 15 years. It builds on the sound he perfected on "Voodoo" while moving it forward. It's not a passible copy of his former glory that fans will put up with because they are hungry for more. We've all bought those albums, and tried to pretend we like them. "Black Messiah" isn't like that.

The fact that D'Angelo was able to release this album on a major label in this age of market-testing and Auto-tuning the soul out of any major release is a feat in itself. It's even more amazing that an album 15 years in the making is so vital. "Black Messiah" is an incredible album, and an essential addition to D'Angelo's discography.