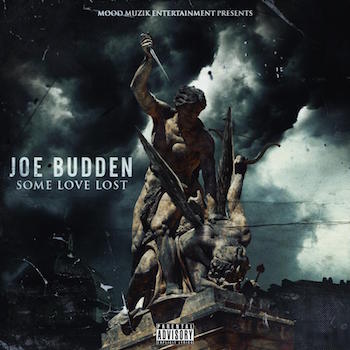 The title of the album is a direct heads up to what's up. "Some Love Lost" is clearly a sequel to 2013's "No Love Lost," and could even be seen as a response to the mixed reception his last album got, which is unusual compared to the majority of his catalogue to date. Our own Grant Jones had this to say about Budden phoning an album in:

"In short bursts, tracks like 'Skeletons' and 'You And I' are excellent examples of Joe Budden, and 'She Don't Put It Down' is as infectious as any other single in 2013. But ultimately, 'No Love Lost' is too inconsistent to leave a lasting impression, and falls short of greatness."

If there's a textbook example of "damned with faint praise" on RR that recognition may indeed go to Mr. Jones. The response from for Joe Budden was to get personal, which has always been his biggest strength, even as a member of the Slaughterhouse crew. With the soft and thoughtful piano backdrop of Karon Graham on the epic eight minute long "Only Human" featuring Emanny on the hook, Budden lays his entire soul bare on the track, leaving no stone unturned in his personal and professional failings. Getting snitched on by a loved one that had him "facing three felonies" is just one of many dramas you can find in the track, which at one point has him contemplating committing suicide to end all of the pain.

"Soon as I wrote down 'Mom' I just stopped! Couldn't lie to her
Couldn't figure out how to say bye to her
Couldn't explain the 'why' to her
Couldn't picture her gettin a call or somebody sayin her son had died to her
And shortly after that my pastor called
Which at first I kinda thought it was weird
But that convo preserved me 'bout God's grace and mercy
He ain't even say goodbye (what he say?)
He said 'Let us pray' and then he went into a prayer
Gripped the phone, closed my eyes
Just so happy he appeared, nigga shed another tear (DAMN!)
Maybe he could sense that somethin had the god devoured
Was thankful that he shed some light upon my darkest hour"

You've got to be colder than ice to not feel a little ache of pain in your heart listening to Joe rap about his suffering. It's the emotional connection he makes that makes Budden a worthwhile rapper, no matter how many party raps or punchline snaps he can deliver through the course of his career. I suppose if you were going to compare Slaughterhouse to Wu-Tang Clan (not that anybody has before now, or that anybody necessarily even should) he'd be Ghostface Killah. He's that dude you know is tough as hell who can get away with being completely emotionally vulnerable whenever he feels like it and get a free pass for it. That's why even when he mimics the flow of the late great Christopher Wallace on "Alive," it's only going to be taken as a tribute to a man Budden clearly respects - and it's just a passing moment in an uplifting DJ Pain 1 track anyway. It's no coincidence that it follows "Only Human" - it brings you back from the brink.

"Some Love Lost" is not an overly long album at 37 minutes, but Joe bucks the conventional musical wisdom both in and outside rap by dropping LONG tracks. Other than the "Intro" none is under four minutes long, and that's fine because these aren't radio songs - these are reality songs. This is more like a mini-documentary, a movie about Budden's life, with him being both the star and the narrator on tracks like "Poker in the Sky."

"Just tryin to explain the unexplainable
More than tryin to attain the unattainable, tryin to make it sustainable
Collectin all the parts, see if they interchangeable
Killing me slow but I'm glad it's entertaining you
Every day it amaze me
The same thinkin that pay me, the same thinkin that plagues me
How can I think I'm crazy? Sway me
Cause to profit off of shit that aches me is actually pretty wavy"

It's unfortunate to me as a long time Joe Budden listener to think that producing art pains him this much, but I can only hope a deeply personal album like "Some Love Lost" is therapeutic for him. I know it is for me after thinking that maybe Budden had fell off a bit as a soloist due to his focus on Slaughterhouse projects, but he proves with this album his ability to command my attention for long periods of time even when he's talking about how much he hurts. Perhaps another comparison outside of the Wu is appropriate then - he's the American D-Sisive. Even when it's all going wrong and spiraling down for him, he still makes that real shit, that shit to make you feel shit.