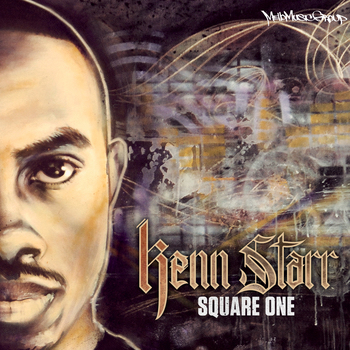 For me, Kenn Starr's brand of underground rap has always been like eating vegetables. I like it, it's mentally healthy, and it keeps my brain tight. But exciting it is not. "Square One" is an enjoyable album, and underground legends Kev Brown and Black Milk produce a work that allows Starr to do what he does best: Masterfully weave words through relaxed beats. Sometimes he arrests the audience with his skillful delivery and lyrical niceness, but equally as often it simply turns into coffeeshop mood music.

"Square One" opens with a track of the same name, setting a jazzy, mellow vibe that lasts through the whole album. There's a dose of frustration in the beginning of the album as strong as the synth instrumentals, a typical sentiment for underground rappers wagging a finger at an industry obsessed with radio singles and marketability. Starr is gifted enough to channel this emotion into his rhyming, addressing his frustrations with lines like "Check the resume/I ain't one of the draft picks/the playground legend been stressing me as a has-been/in the industry where you're only good as your last hit/and I never had hits so it didn't surprise me" (Say Goodbye).

There are several shining moments in the album that reaffirm the reason Starr has amassed such a significant underground following. In "Strangers," Starr is in his element dropping the finest wordplay over chill snares. "The Definition" featuring Melanie Rutherford is a great friends-with-benefits track about relationship definitions. It's also a testament to Black Milk's ability to produce a track that feels vintage but not dated, harnessing old-school boom-bat beats and a choral melody with a wandering hook overlaying subtle beatboxing in the drum loop.

The standout track of the album is "Cigarettes and Whiskey," produced by Roddy Rod. Again he keeps it real, delivering amazing bars over ethereal choral chants.

Unfortunately, the greatness of this track only serves to emphasize blandness of the next one.

Kenn Starr is lyrically sick enough to almost always deliver prime content in his lines, but "Square One" is hampered by how some of the less memorable tracks are forgettable enough to rock a baby to sleep with. Therein lies the age-old conflict in underground rap. If a tree falls in a forest and no one's around to hear, does it really make a sound? If a rapper spits lyrical fire but delivers it over a track that bores us to tears, is the talent really heard?

Although not a complete reinvention, as the name of the album implies, Kenn Starr has developed as an artist with his second work. Compared to "Starr Status," at least they skipped the monotonously long hooks. The snares are less distracting and there aren't a lot of features, smartly putting the focus on Starr's rhyming abilities. Kenn Starr isn't an artist who aspires to the mainstream, and this attitude in "Square One" is pretty much summarized in the Kev Brown remix of "Product of the Basement": "I ain't interested in living in the spotlight/I keep my brim low/those dudes listening saying I'm too intricate/maybe I'm too menacing/sensitive niggas is not nice I've been told." After all, does being heard by a larger audience matter if your true fans are on your side?