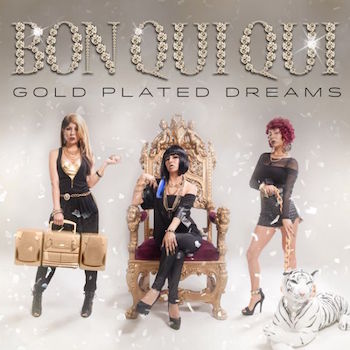 Conceptual comedy albums in hip-hop tend to be hit-or-miss. Either they go too far over a listener's head, fail to reach their targeted demographic, or the album is merely a joke in and of itself. Someone like J-Zone usually never falls short on the albums he produces. He manages to garner acclaim by ridiculing elements of pop culture and having humorously biting social commentary on observed trends in hip-hop and beyond. Canibus' 2001 album "'C' True Hollywood Stories" was of such low quality that I couldn't tell if it was because of the album's budget or if said quality was indeed the deliberate satire. Comedienne Anjelah Johnson-Reyes tries her hand at such albums via her MadTV alter ego, Bon Qui Qui.

For those who don't know, Bon Qui Qui fits the rude, hoodrat, neck-rolling-chickenhead caricature that we've all seen embodied to one degree or another in certain people. The character works the counter at a fast-food establishment parodying Burger King and is typically ignorant and rude to customers. For example: She'll be at her position having loud, slang-filled, not-safe-for-work cell phone conversations in front of customers. The joke of it is that she admonishes them for their exasperation with her unprofessional demeanor ("Excuse me?! You don't interrupt me! RUDE!") and is completely unaware of her own shortcomings. The character's popularity on MadTV, comedy routines and YouTube videos secured Anjelah a recording contract with Warner Bros Records. As Bon Qui Qui, she released her full-length debut entitled "Gold Plated Dreams" on January 20th. In terms of the character's journey, Bon Qui Qui's decided to try her hand dominating rap since she's failed to keep any previous job. So how'd she fare?

If the album was intended to keep the character's fan-base laughing, then it will. So long as serious hip-hop listeners don't take the album seriously, they'll get the joke of it as well. After listening to the album, I've come to think of Bon Qui Qui as a send-up of current mainstream rap culture: Ignorant, trendy, materialistic and an unbridled obsession with instant gratification. What's even funnier is that there may be tons of people who view and laugh at the character without ever realizing that the joke's on them. To her credit, Anjelah stays in character the whole way through and, as such, the production is entirely comprised of glossy, club-friendly synths and 808 drum programming. The music is oscillating and, for a brief fraction of a second, I was almost reminded of the production on one of the Run the Jewels albums. The lyrics are rude and obnoxious peppered with marginally-clever wordplay. Check out this lyric sample from "No Boyfren":

"Ain't gotta boyfren, they so dumb
Marathon Men, always on the run
I'ma down chick, yet I'm so fly
Your girl too fly to date a soft guy
...
They say I'm ghetto 'cause I get low
I'm the main event, you the pre-show"

One interesting thing is the brief double-time spitting that she does close to the 2-minute mark. The most talked about track is the viral single "I'm A Cut You". Inspired by her frequent threat to rude customers, Bon Qui Qui takes it further and makes a song out of it. Juxtaposing menacing synths with layered amped-up guitar riffs, the song is a hilarious lyrical depiction of "hood logic". The album's sixth track, "Sacurrity", is a tongue-in-cheek ode to women like her who believe they're entitled to have a man whose sole purpose is to take care of them.

I have to admit, most hip-hop albums with a significant comedic bent don't do much for me unless a point's being made about some vice or societal ill. Though I see the character of Bon Qui Qui as a satire, I don't know if that's truly the intent by design. As a self-aware listener, I can chuckle at several parts of the album. "Gold Plated Dreams" isn't something I'd have in my collection or even my regular rotation. But for somebody still in touch with their inner immature 12-year-old and still laughs at old Jerky Boys records, this is for you.