:: Fill in the Breaks
as reviewed by Steve 'Flash' Juon 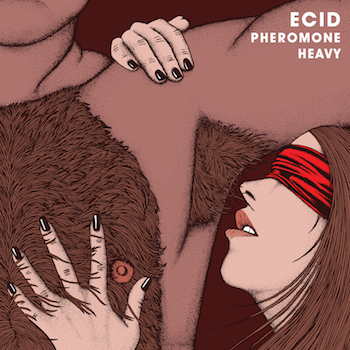 "If I ever win the lottery, I'll probably destroy the winnings
Just to avoid the fake friends asking me to fund their 15 minutes
But first - I'd get a life supply of Chinese food and Chicken McRiblets..."

I spent a half hour pondering how to describe Ecid to listeners who had never heard his music before, and what I ultimately realized is that Ecid puts me in the same headspace I inhabited in college. There are rappers I listened to 20 years ago that immediately gave me the feeling "This is TOO RAW for mainstream. It's too dirty, it's too smart, it's too unorthodox, it's too antiestablishment. This won't make sense to anybody else. It just can't. He/she/they are too far out there even for the incredibly open and unrestricted boundaries of hip-hop. Everybody's going to hate this. I'll f#%! with it though - this weird s#%! is cool." Self-satisfied in my holier-than-thou hypocrisy, I'd swig my 40 ounce bottle and drift into a stupor as the room spun around me, convinced I had passed beyond the limits of music and reached a higher plane of existence.

The next morning I'd wake up with a pounding headache and a needle skipping off the label at the center of a record, wondering what the hell I had been listening to and why I thought getting my synapses smashed to atoms would make it make sense. I'd grab a Coke from the fridge (no coffee for me in those days) and try to piece the fragments of my brain back together to figure out if I had a class that morning and whether or not I was late for it. In the harsh light of day some of those "brilliant" albums wouldn't stand up to scrutiny - the noise I previously thought was so next level that it was genius turned out to be all sound and fury that was signifying nothing. Some passed the acid test though. Company Flow didn't get worse sober - it got better - and when my head stopped pounding it started nodding infectiously to the beats and the rhymes.

Ecid's "Pheromone Heavy" is my college days personified - underground, anti-commercial, weird and quite possibly more brilliant if you're completely out of your mind. "I'm a gangster, a hipster, and a hippie with a weakness for the whiskey" quips Ecid on "Vinyasa Flow," which is almost a redundant song title since for yoga practicioners vinyasa IS flow - the flow of movement from one position to the next in coordination with cotrolling your breathing.

It works as a metaphor for Ecid though (who incidentally studied to be a yoga instructor) since rapping is all about controlling your breath, and there's little doubt he can bend words with his tongue and lungs with the best of them. He doesn't have many guests and he doesn't need them either - they'd interrupt the singular experience of songs like the pounding "Monopolized."

"Who isn't bored as f#%! looking to ignore their stresses?
Sometimes I wish I had a drug problem to invest in!
At least then I'd be too high enough to forget it long enough
to get over the headache of day-to-day dependence
I've been a little preoccupied... been meaning to keep up with keeping up
I've been a little monopolized... been meaning to say I still beleive in us"

The method to Ecid's madness lies not only in the fact he can explore his brain's random twists and turns from the profound to the absurd, but that he produces his own beats to do it over and thus has no one to reign whatever creative impulses he feels. That is of course a dangerous proposition if your creativity schews in the direction of someone like Kool Keith, a man who is undoubtedly brillaint but capable of producing some of rap's most unlistenable music when left to his own devices. Thankfully Ecid still remembers that storytelling matters, and that making songs is more than hitting random notes on a keyboard and then slapping a drum track on it.

"Running From Cops" is the kind of adventure that could be filmed as a sequel to "The Hangover." Ecid meets Eminem meets philosophical musings on "Don't Wanna Know" as he admits "I'm addicted to negative energy" and that he needs to get turnt up, but only because the world's filled with too much sorrow and he just can't stop watching depressing documentaries. The musical twists and turns (and reverses) of "Better Off" would be a joy as a solo instrumental track, but it's equally dope to hear Ecid rap "The worst thing I ever did was make my mom cry/The best thing I did was wake up and apologize." It feels like Ecid has no filters between himself and his audience, and when listening to him address an absent father who'd rather be his "bro" as his dealer than a role model on "Watch It Burn," you can only draw one conclusion - Ecid either (A.) writes some VERY believable fiction or (B.) the whole point of making music for the man is an exercise in psychotherapy.

Perhaps it's both. Maybe it's neither. Whatever the method is to Ecid's madness, I'm willing to sip from the Kool-Aid a little longer, so long as I don't wake up tomorrow morning back in my college dorm room with vomit on my chin and regrets from an empty bottle of orange juice and a half empty bottle of gin.