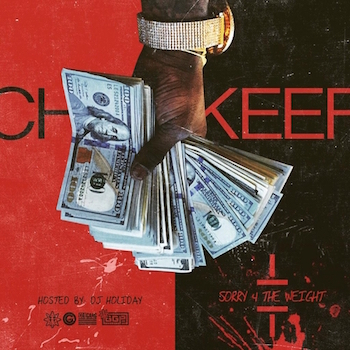 Keith "Chief Keef" Cozart has been through more shit in his 19 years than most people go through in a lifetime. He grew up in the Chicago's chaotic and violent Southside, aka ChiRaq. In just the past two years two of his relatives have been shot and killed. Keef seems to spend as much time in front of a judge and in the studio for reasons both serious (pointing a loaded gun at cops) and bullshit (smoking marijuana). He became the poster boy for Chicago's drill scene, getting mainstream attention for his 2012 major label debut "Finally Rich." When he wasn't able to translate his street buzz into album sales, Interscope let him go. Getting dropped from Interscope hasn't slowed him down, it seems. He's released several mixtapes in the past twelve months, and has spent the last few months building a guest house next to his mansion. He's set to release his follow up to "Finally Rich" any day now, and in the meantime has released "Sorry 4 the Weight."

The title references Lil Wayne's most recent mixtape. Like Lil Wayne, Keef is disillusioned with the major label system, and he's also been getting increasingly weirder on his mixtapes. Keef being wierd is still Keef, and he never approaches the alien genius of Lil Wayne in his prime. Weird Keef means having comic Andy Milonakis be the only feature on the tape, and having numerous spoken ad-libs where he rambles inarticulately about his city, his mansion, or what Glo Gang means. Keef raps about four things, in this order: making money, how he doesn't got time for women, getting high, and taking out people that cross him. That's the entire subject matter of "Sorry 4 the Weight." He keeps things straight forward and simple. For example, on "5AM" he raps:

Keef's music is more about the vibe than the actual content of the words. Like a lot of rappers in his cohort, he often raps in a sing-songy flow filtered through Auto-tune, which lends a musicality to his flow. He strikes an attitude of detached cool and menace, like he can't be bothered to give a fuck about anything but won't hesitate to shoot you over nothing. It's a pose that has made him a wealthy man. He may not be a master wordsmith, but he's not stupid. You don't end up buying a mansion and being one of the hot young rappers by being an idiot. It's hard to tell how much of his persona is real and how much is an act. There's definitely a savvy businessman hiding under the dreadlocks and photos of him posing with assault rifles, pistols, and katanas.

Production is handled by GGP, Chopsquadd, Dolan, and Keef himself. They all hit hard with cavernous bass, icy synths, and rattling hi-hats. Keef knows enough to find dynamic beats to make up for his emotionless rapping. When his formula works, you can begin to understand why a rapper with so little to say manages to get over 100,000 people to download his mixtape in less than a week. Songs like "Ten Toes Down" and "Guess What Boy" combine brutal bass and subject matter with sung rhymes and EDM synths. On songs like these, Keef's simplicity can be an asset.

I hated "Finally Rich." I liked "Sorry 4 the Weight" marginally better, if only because Keef seems to be having more fun and acting less dead-eyed. It's still a little baffling to me that he represents what the kids get excited about these days. He's a rapper who can't rap, he has the persona of a charming psychopath, and he basically records different versions of the same song over and over again. ("What are we doing in the studio today, Keef?" "Well, I thought I'd mumble-sing some verses about getting money, bitches, and my squad. Then I was gonna do a track about my squad, bitches, and getting money." "Sounds good! Roll tape!") But the kids love it and the formula works, so who the hell am I to criticize it. Keef doesn't speak to me, but I think he's doing fine without my business.