Chrome & Illinspired :: The All C n I 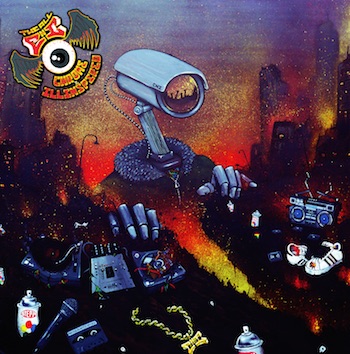 Remember when something was 'fresh'? Hip Hop had to have a certain type of dopeness to be classed as fresh, and this new album from UK duo Chrome & Illinspired is most certainly FRESH. The irony of being labelled 'fresh' in 2015 is that "The All C n I" doesn't necessarily qualify as the true definition of fresh - "not previously known or used; new or different". This record is aligned with B-Boys and DJs, an oft-forgotten era in Hip Hop that is overlooked by many in favor of the mid-90s New York sounds of Havoc, DJ Premier and Da Beatminerz.

There aren't many throwback acts continuing to drop beats like it's 1988, and it's obvious why when you listen to any piece of Hip Hop from that time period - it sounds old. To sound fresh and old school at the same time doesn't really make sense, yet does when you've been listening to everything 2015 has to offer. It's not so much fresh, but reFRESHing.

This album isn't merely an 80s throwback though; more a breakdancer's record with some rapid-fire flows and swiftly executed turntablism thrown in for good measure. "Big Dreams" best exemplifies this, along with "In Control in Effect" which has the feeling of a UK Garage crew dropping flows in the early 2000s. It's all rather pally, jovial and very, very English. Most importantly though, it's executed superbly and showcases a side of UK Hip Hop that hasn't been seen since DJ Format and The Scratch Perverts.

One of the main culprits for this, Tim Westwood, is even given a cheeky nudge on "All Days", ending the song with a clip from his early days (presumably the Capital FM years). It's clear that Chrome and Illinspired are influenced by groups such as Gang Starr and Public Enemy, with songs like "A Moment of Your Time Please" slowing the pace to shift some focus on to the rhymes. Unfortunately, the lyrics are never the point of this release - they are a complement to the music more than anything.

Chrome & Illinspired's "The All C in I" could well work as an instrumental record, but would be infinitely less interesting for it. It evokes memories of groups like Ugly Duckling, which is great company to keep, but I did find the record loses some of its energy about halfway through. There's also some decidedly weak guest emcees (everybody on "Shock the Place Part 2" is trash) which is a shame - I'd like to have heard Chrome and Illinspired trade bars with Life MC, Stylah or even Sonnyjim. Guys who can ride a beat. This is a skill that both Chrome and Illinspired possess, and while the content of their lyrics is nothing more than raps about rapping, it's good natured and admirably delivered at a relentless pace.

Vocally, both emcees surprised me initially, as I thought this was an Australian Hip Hop album. The 'fresh' factor, coupled with accents that aren't London or Northern, lend this record an approachable quality that is more often associated with sunnier climates. Chrome and Illinspired hail from Norwich (East England) and sound most like nearby Essex residents Iron Bridge, both in terms of tone and the ability to disperse words at a rapid rate. The guys aren't quite as outlandish or dare I say childish as Jibberish or Dirty Verbals, but there's definitely a playful atmosphere to this record that is easy to be won over by. Scratching is used as an instrument on most tracks, showcasing (I'm assuming) Chrome's turntable skills.

As KRS-One once said on BDP's "Questions and Answers" (and is sampled on "Underground Interlude: Nerve Centre") - "Are you really all that fresh? The answer is YES YES YES!"