Red Pill :: Look What This World Did To Us 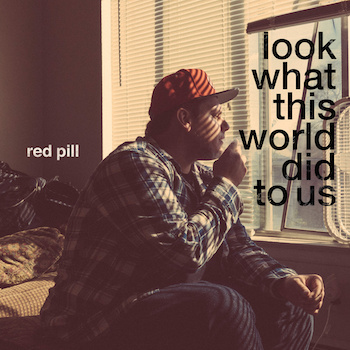 Red Pill quickly became one of my favorite up-and-coming rappers in late 2012 when I heard his song "Waiting On The Train." His album with fellow Detroit-area beatsmith Hir-O, "The Kick" was one of 2013's more underrated records, which helped link him up with Mello Music and Apollo Brown-led group Ugly Heroes. Nearly two years later, and Red Pill is back with his debut solo album on Mello Music Group titled "Look What This World Did To Us." And like "The Kick," "Look What This World Did To Us" is very focused and personal.

On "Look What This World Did To Us," Red Pill is a jaded 20-something, bored with a life that has brought more disappointment than excitement. On the opener "Meh," Pill is wholly unimpressed with his life, and is simply going through the motions. He raps on the hook:

"Look What This World Did To Us" doesn't pack a lot of energy or lyrical dexterity, but Red Pill's writing and storytelling is very understated. His attention to detail on tracks like "That's Okay" is more appreciated in repeated listens, as he raps about a waitress messing up his order. His writing is never weighed down by wordiness, complex cadences or unneeded details. His simplistic approach is brilliantly executed on the highlight, "Windows." He raps about the monotonous life of working in a windowless factory, and the humiliation of having to borrow money from his younger brother.

"Told him I needed money, he said how fuckin much?
Just for a couple weeks, a couple hundred bucks
Soon as he told me 'Yes,' I thought about
How embarrassing it feels, when feeling down and out
So I apologized, said it's not all right
You're my little brother, one day I'll make it right
But I still need the money though
He responded with the 'LOL' it isn't funny though
Cuz I don't know what the hell I'm doing
Been doing this for so long, it's feeling normal
I think I relate to that caged bird
That wanted to escape from this gray world
When offered his chance to finally go
He decided to stay, what's the point without hope"

The production on "Look What This World Did To Us" is handled by L'Orange, Hir-O, KuroiOto, Duke Westlake, Castle and Red Pill himself. The beats on the record are appropriately bluesy, sparse and slow paced. Occasionally the album gets a little too tedious, particularly "Blus" and "Drown," but for the most part its pacing is rarely a problem during the 40-minute record.

Much of this record is very sad, which makes the perfectly executed "Rap Game Cranky" and "Leonard Letdown" very important for the album. With extremely heavy, personal songs like the title track and the "Overcast"-era-Atmosphere-sounding "Rum and Coke" taking up most of the album, comedic relief is much needed. And the two songs display the self-proclaimed "Harvey Pekar if he could rap's" self-deprecating sense of humor. On "Rap Game Cranky" he cleverly flips mainstream hip-hop tropes into tales of him drinking alone in his apartment, ordering pizza (ie: "I'm more Eeyore than Christian Dior."). On "Leonard Letdown" he amusingly compares himself to some of life's biggest disappointments (ie: the Internet malfunctioning while trying to watch porn, and "Blueprint 2").

"Look What This World Did To Us" is a wonderfully mundane album. It's paced like an episode of "Louie;" it's a pretty big bummer with comedic moments sprinkled in, but its value is in its accurate depiction of day-to-day life. Red Pill appropriately opens and closes the album with clips of Charles Bukowski speaking about how boring life is. It's pretty clear Red Pill sees himself in Bukowski, as the writer, famous for his poetry and novels like "Women" and "Post Office" is often grumpy and focused on the ugly aspects of the world. But the 27-year-old rapper, like Bukowski, brings beauty to the world with his simplistic and relatable writing.