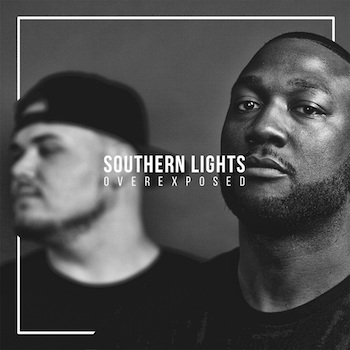 I've noticed an increasing tendency on our part at RR to cover Christian or faith-based hip-hop; this has made me wonder if we're more open-minded toward this interpretation of rap than our peers, or if we just enjoy the more positive outlook from faith-based rap that's not glorifying a life of conspicious consumption and meaningless sexual exploits. I think it's probably both. I enjoy Kendrick Lamar's "Swimming Pools" as much as the next man, and I'm not too grown to enjoy occasionally feeling a buzz, but it seems like I had the appetite to ball when I had no money at all and once I did I felt like spending it all on alcohol was a waste. Such is life.

Christian rappers seem almost apologetic about not wanting to be decadent or nihilistic, and the press release for "Southern Lights: Overexposed" is no exception. Direct quote: "While purposely shining the light in the darkness, this does not mean that each song will be a sermon." Damn. So if you don't want to smoke like Wiz or drink like Kendrick, you're apparently thumping the Bible. Who said they even needed to explain having a good message or not wanting to be self-destructive? Perhaps "I-285" would have said it better:

What do you do with hip-hop artists who've got a good message that's not being delivered in a corny way, who may just have a hint of Christianity to their lyrics, who aren't pretending to hide their faith? And why do rappers get judged for it anyway? It's not like DMX didn't include a prayer on every album at the height of his fame and popularity. So maybe positive rappers should stop apologizing for not wanting to be negative, whether or not they have a faith-based background. Dre Murray and Alex Faith are all about making good music, ignoring whether or not it's "good" music. It's so good that they even made a movie out of it. The songs run the gamut of moods and emotions, from the somber and serious "Decatur Street Blues" (featuring Corey Paul) to the reflective and inquisitive "Takin' Time" (featuring Young Noah): "I shoulda stayed in school but I ain't really have that college heart/I took a couple tests and I passed 'em/But I still feel the call to be a pastor, should I ignore or look past them? .. Am I foolish enough to think that I can change/even though my heart was hard and darkened, I won't ever be the same." The chorus might irritate me by being AutoTuned under different circumstances, but the sentiment "I ain't got no money but I'm feeling rich" seems to say it all.

"Southern Lights" isn't overloaded with big names in hip-hop, or heck even big names in the Christian hip-hop scene, save perhaps for Swoope on "Wake Up Music." It also doesn't need them. What's delivered on this 40 minute album is just enough positivity and consciousness to harken back to the "Edutainment" era of hip-hop without really sounding like chapter and verse from the Gospel, and if they didn't point out that they were rappers of faith you probably wouldn't even think twice about it. It's just good music.