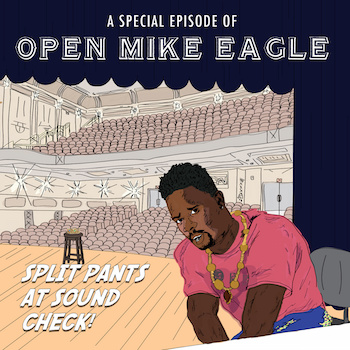 Somehow, in between touring and recording his podcast Secret Skin, Open Mike Eagle found time to record a six-song EP. The EP is a continuation of his excellent "Dark Comedy," and starts off with a reworked version of the first track on the "Dark Comedy." Titled "Dark Comedy Late Show," the track highlights Open Mike's ability to mix the silly with the serious. One minute he's joking about the Spin Doctor's and making "Adventure Time" references, the next he's talking about the aftermath of Ferguson. In between the jokes and nerdy references is some serious anger and pain:

If you enjoy playing "spot the reference," then this EP is for you. Mike drops nods to everything from indie rock singers to politics to Islamic extremists to video games. "I'll just be a mix of Martin Mull and Plies," he raps on "Stay Still Awake (Up Before Ayybody)". On "Ziggy Starfish (Anti-Anxiety Raps)", Mike discusses his place in the world:

The beats all draw from glitchy electronica, with video game samples adding to Mike's nerd cred. Electronic musician Gold Panda produced "Ziggy Stardust," which is the most melodic track on the album. It showcases the more musical direction Mike has been going in, and manages to mix electro-pop and hip-hop in a convincing and satisfying way.

There aren't that many rappers who occupy the same lane as Open Mike Eagle. He's smart and nerdy but serious at the same time, and manages to make music that is funny without being frivolous. "Dark Comedy" saw him really finding his own as an artist, and "A Special Episode Of" offers six more reasons why you need to get to know who Open Mike Eagle is.