:: Below System Records
as reviewed by Patrick Taylor 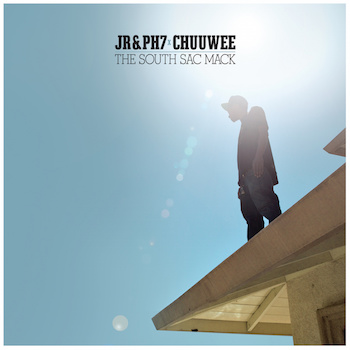 Sacramento, California doesn't get much love. For the capital of one of the largest economies in the world, it is a bit of an isolated backwater. It's two hours from the San Francisco Bay Area, about eight hours from Los Angeles, and doesn't have any of the economic or cultural cache as those cities. Beyond Death Grips and Blackalicious, their main cultural export has been Cake, Tesla, Deftones, and Sasha Grey.

Chuuwee is here to put Sacto back on the map. The 24-year-old rapper has been putting out mixtapes since 2009. His latest effort is a collaboration with German production duo JR&PH7, "The South Sac Mack." Chuuwee has described his music as lyrical trap music, which is as good a description as any. Like Joey Bada$$, Chuuwee is a low-key rapper who is a student of early 90s hip-hop. He's less concerned with flash and attitude than many of his contemporaries, instead letting his lyricism take center stage.

"South Sac Mack" is in the vein of "good kid, m.A.A.d city," in that it explores the life of a kid growing up surrounded by drugs and gang violence. The South Sac that Chuuwee paints in his songs isn't that different from Compton. "Wake up to a gunshot banging/Another South Sac alarm clock," he says in "Meadowview Morning," a song about the neighborhood he (and Cornel West and Levar Burton) grew up in. On "Powder Inn," he raps about drug dealing, explaining that although he's "Controlling that contra/Still conscious like Common."

A lot of the songs reference specific landmarks or areas, like his high school, the swim center near his house, a local park, etc. It does a nice job of setting the scene, but Chuuwee gets in a little too much detail about his neighborhood at times. There are not one but two songs specifically about public transit ("Florin Light Rail" and "Regional Transit"). Listening to someone describe what bus stops to take to get to neighborhoods you aren't familiar with is not incredibly interesting.

Chuuwee's rapping about the hectic life on the streets is interspersed with a lot of rhymes about chasing or being chased by ladies. While there are some heartfelt moments, the romantic rhymes tended to be the weakest on the album. "James Rutter (Swim Center)" has a verse that equates having sex with powering up in a Sega Genesis game. He comes off like a stalker on "Florin High Flirt," following and pestering a girl until she finally gives him attention. His story of being jumped by rivals while having sex in "Meanwhile Off Mack" work better.

Despite being European, JR&PH7 offer up seventeen tracks of laid back Cali hip-hop. There's a definite slow jam vibe to some of the songs, like "Florin High Flirt" and "Meadowview Morning." Elsewhere there are jazz elements, lazy horns and guitars, all backed by snapping drums. Like Chuuwee's rapping, the beats are laid back and not too showy.

"South Sac Mack" may be released on a European label, but it is Sacramento through and through. Like that city, the album has a lot to admire but isn't without its rough edges and areas you don't need to go back to. And it can be a little boring. Chuuwee shines when he ditches the adolescent horndog raps and gets more introspective. There's enough of that on this album to make it worth listening to, and to make Chuuwee and artist to keep your eye on.