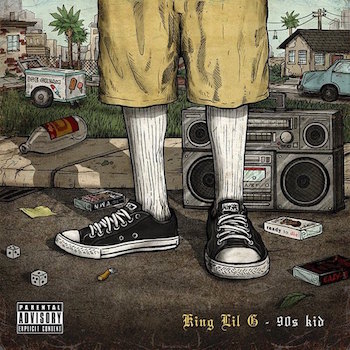 Roughly ten years ago several individual artists began promoting a New West (following a similarly motivated New Bay movement). But it is only now that we witness a surge of younger artists that really constitutes something of a new West Coast. Odd Future Wolf Gang Kill Them All and Top Dawg Entertainment were at the forefront and since then the likes of YG, Vince Staples, Casey Veggies, Problem, Kid Ink and Ty Dolla $ign have further helped put spots like Compton and Inglewood and L.A. County in general back on the map. Even forerunners like Fashawn, Nipsey Hussle, Dom Kennedy and Tyga have managed to ride the new wave of West Coast rap.

Let's see if King Lil G belongs in such illustrious company. Debuting generically as Lil Gangster in 2006, then laying low as Lil G for some time, Alex Gonzalez has crowned himself King Lil G for the past couple of years, continually bringing his brand of g shit up to date. If his 'King' era videos have all easily exceeded the million views mark while he's still not mentioned in the same breath as the above, he may very much be victim to the disadvantages Latin artists typically face.

The artwork for "90s Kid" scattered with sketched "Eazy-Duz-It," "The Chronic," "Doggystyle," "Ready to Die" and "The Art of War" tapes may serve as an indication that G upholds some kind of album ideal, which may be slightly anachronistic in the days of YouTube ubiquity but apparently still a concern to prominent West Coast rappers from Kendrick Lamar to YG. To further situate King Lil G and his generation - although the O.G.'s (Eiht, Cube, Ice) wrote the book on concrete street rap, The Game has to be acknowledged as the main reformer of personal emotional narratives nourished by the streets of L.A.

The album is off to a promising start with two introspective tracks that cut back to G's childhood. "Ignorance" deals specifically with schooling, the Inglewood-raised, South Gate-residing rapper taking the notable stance that, although he messed up is, he considers education a one of a kind chance. But the streets apparently got the better of him, as he recounts in the following "Grow Up":

"My mother worked two jobs, gangbangin' was too raw
1993 I was bumpin' some of that Snoop Dogg
'Murder Was the Case', my uncle caught a case
My grandmother stressin' out, I could feel the pain
Actin' older than I was, I shoulda been actin' my age
I had to walk to school, I got recruited to the game
My mother tried to do her best on minimum wage
But it was hard when I seen the drug dealers in the Range"

King Lil G's storytelling wouldn't be as effective without the atmospheric production, Infameezy's slow-motion bounce (reminiscent of minimalistic-era Muggs) on "Ignorance" and Bennie Ward's "Chronic 2001" sound for this decade on "Grow Up." The deliberately slowed down pace gives these tracks a precision that asissts the rapper in his soul searching. His reenactment of the school principal calling his mother isn't all that special but it's still an MC's tool that you don't witness in action often these days. His young sounding voice also comes to his help when he tries the capture a child's way of thinking. At the same time he is able to reflect on wrong decisions and articulate feelings in retrospect. "My mama held my hand standin' at the bus stop / gave me the love I needed in streets covered with gunshots" is one such moment. "Goddamn man, I shoulda never left school / I shoulda stayed the same kid, quiet and respectful" another.

"90s Kid" would be too preachy if it always ended on the same conscious note as the first two songs. Still it is hard to ignore that the following three tracks all take place under the patronage of Mary Jane. "Weed 4 the Low" gets fellow AK47 Boyz Self Provoked and LA Gun Smoke on board as producer Foth Dimen creates the illusion of a Bone Thugs sample with meditative "Killa" chants. "That Loud" sees King Lil G flexing over some of that moody musica de Harry Fraud, featuring a saxophone lead nonetheless. A familiar interpolation by Reckless the Producer illuminates the intimate "Get High," which concludes the album's smoking section, although in fairness each track uses weed merely to set the mood, as "Weed 4 the Low" deals with gang life, "That Loud" with personal freedom and "Get High" with female companionship.

But while these examples show that there's more to his songs than meets the eye, King Lil G also has the tendency to sound deeper than he actually is. "No Reason" could be a great song about things happening for no rason and people acting with no reason, but despite storytelling angle, Snoop Dogg tribute and 'Menace II Society' dialogue it just falls short. "Same Ones" uncovers, hesitantly, family bonds, but fizzles out in generic lines. In these songs, G is reflective, but not reflective enough for what he sets out to do. Closing the album, "Gang Signs" and "Mistakes" unsuccessfully try to tie in with the opening sequence, as if Lil G had lost some of his initial inspiration and artistic ambition.

King Lil G has to be commended for his brand of conscious West Coast rap. His sober, matter-of-fact delivery matches the sparse and largely non-irritating production. "90s Kid" is an overall worthwhile 40 minutes that contain a couple of interesting moments where the past and the present and the public and the personal collide ("More Bounce" juxtaposes DJ Mustard against the classic sounds of Zapp, "'96" connects G's own juvenile years with the death of gangsta rap icon Eazy-E), but "Ignorance" and "Grow Up" are the songs where King Lil G's vision is most clearly outlined.