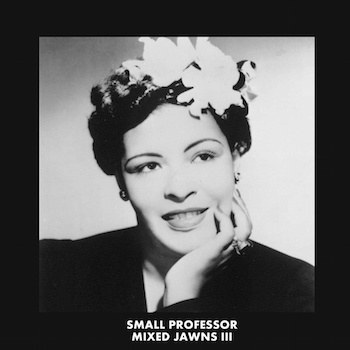 Hopefully long-time readers of RR are familiar with Small Professor by now, a hip-hop maestro whose name is clearly inspired by his large and in charge counterpart. While we all-too-rarely hear from the latter these days, the Extra Small P continues to drop two or three all instrumental releases per year, and he brings a remarkably consistent quality to each one.

You may ask yourself, "If Small Professor is all that, why aren't more people rapping over his s#^! then?" It's a fair question. One of these days we really should sit down with Small Pro for a chat and ask him about that. The snobby answer would be that he rarely finds emcees worthy of blessing his beats, but I also find that answer to be far too simplistic. It's more fair to say that Small Pro creates instrumentals that stand alone as the "Jawns" they are marketed as. They have that quality in common with the late great J Dilla, and I know that's high praise, which is exactly how it's intended. I can sit and listen to an album of banging beats from either one and not miss hearing a rapper bless the track. It's not as though a quality sixteen bars would detract from their cuts, but it's that you can bob your head to the beat either way, cause they're just that good.

Small Pro tends to work in enough snippets of hip-hop vocalists that you may just be blissfully unaware that anything's amiss without an emcee anyway. His instrumental albums have that in common with a quality CD from a turntablist who doubles as a producer (or vice versa), in that it's a seamless mix with just enough of that rap in it, while keeping the focus on the music and the blended layers as opposed to the verbals. In fact the one doing the "rapping" per se here is Small Pro with the song titles, which address the issues of the day that are prevalent on his mind. Back to back song titles read in sequence are like lyrics in their own right: "Wish men would stop harrassing women on the street." "Wish cops would stop killing unarmed black people." Me too P, me too.

Pro is also having some fun with remixing hip-hop legends on this album, as he flips LL Cool J's "Hey Lover" on the whimsically titled "Blowticious," and turns the late Eric Wright's "Switchez" into something that sounds more like bluegrass than Compton G-Funk. This occurs several times throughout "Mixed Jawns III," and each time he reworks an old hip-hop track it's a new and fun experience. It's that sense of whimsy, still done in a tasteful and respectful way, that distinguishes Small Professor from many of his instrumentalist contemporaries. He even mocks himself in his own song titles with tracks like "Endless loops cause reflection (wrist x 7)," making this a very self-aware exercise in piano breaks that doesn't suffer for it. In fact it's a mellow smooth tickling of the ivories pulled from a crackling vinyl record that couldn't be any more fresh or crispy if he tried. Hopefully by now you get the gist of what I'm trying to say - Small Pro is something special behind the boards. That's why unlike a lot of people who put their material out on Bandcamp, the Professor is not content to simply let you "name your own price" or download an album for free. "Mixed Jawns III" starts at $8 and goes up from there - and if you paid more it would still be worth the cost of admission for these 43 minutes of music. From the saxophone laced "Fake '08 blu jawn" to the shot calling "Phat passed on this beat, I made it to a jam" there's nothing not to like on this album. It doesn't lack a lyricist - it simply doesn't need one.