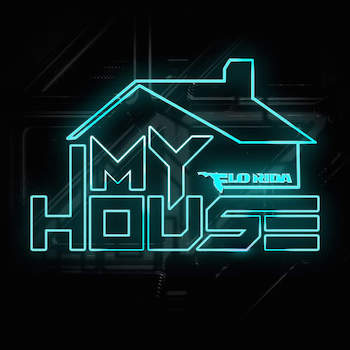 Purists may scoff at Flo Rida's music, but there's no denying that the dude can rap. There aren't many tracks of his with verses that pop fans can recite willy-nilly, and while he's no Pharoahe Monch or Black Thought, he does drop some flows that ride the beat well. Whether you enjoy Flo Rida's rhymes or not, his choice of music to rap to is divisive and pushes the boundaries of what many would consider Hip-Hop. However, there's no denying Flo Rida has mastered the chart-rap style that he so quickly learnt with "Low" back in 2007 - to the point that he is the go-to guy for Hip-Pop music that manages to satisfy teenie boppers and drunken 20-somethings in equal measure.

"My House" is a strange release, as it's rare to find a top-selling rapper drop an EP - or at least it used to be. The half-album is traditionally reserved for indie artists, yet the transition to digital has seen EPs from the likes of Ludacris and G-Unit in recent months, artists you'd usually associate with mixtapes. Artists now know that many fans only want the 7 good tracks on a 20-track mixtape, so these heavy hitters have cut the fat in that sense. Flo Rida is a singles-driven artist who's never going to be dropping classic Hip-Hop material, so it's no surprise to see his EP "My House" consisting of 7 songs that could all be singles.

"Wobble" lacks some of the punch that the rest of the songs possess; a minimal guitar-driven beat is catchy enough but does feels flat. Despite his reliance on guest vocalists on singles, Flo Rida is perfectly capable of lacing hooks on his lonesome - "My House" (the song) proves this. It's also the most traditional Hip-Hop sounding song. If you aren't a fan of R&B singers cashing in on the EDM movement, Chris Brown's arm-waggling performance on "Here It Is" isn't going to impress, and provides nothing new to fans either way.

The track currently setting charts alight is "G.D.F.R." (which stands for Going Down For Real) - showing that this generation are now too lazy to read more than three words in their song titles. The acronym isn't used once, and despite it being nothing more than a dance song with Flo Rida tying the drop together with his forgettable rhymes, it's impossible to ignore something so catchy. The same can be said for "I Don't Like It, I Love It" which sees Robin Thicke try to balance his books with his next stab at a monumental summer anthem. It's derivative, hollow pop that could have been created in a science laboratory by experienced music producers and overpaid radio execs, but if it isn't spun to exhaustion on the airwaves in the coming months then it will hold up as an innocent piece of Hip-Pop. I didn't expect to enjoy "My House", but somehow I did. It's fun, good-natured music you can dance to, and is well suited to the imminent BBQ season. And you know why I enjoyed it? Because only one of the tracks has been whored by the radio and music video channels. Ask me if I enjoy this EP later in the year when the Robin Thicke single has been abused more than a Flo Rida whistle sample, and I may be sick of Mr. Rida and his industry formulae. He hasn't built a career around great, memorable LPs so as far as a throwaway slice of accessible rap goes, there's few doing it as well.