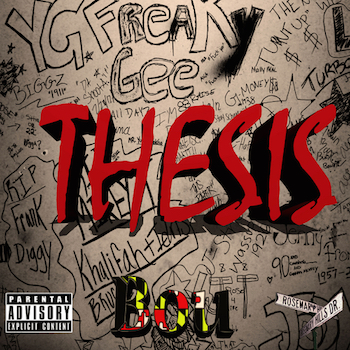 One of the most frequently-heard lamentations that each generation has for the next one is how they're possessed of a lack of respect, motivation and values. Once you're in your thirties, you begin to understand further. When I've gone out in public, I've overheard teens making statements that are just as ignorant as they are blasphemous (just like they're style of dress). I overheard two teenage boys praising Soulja Boy over 2Pac. Seriously. Ridiculously enough, they were both wearing skinny jeans while desperately trying to make them sag. I took the situation with a modicum of humor, but the point is the lack of respect that most of these younger folks exhibit nowadays. They claim to listen to hip-hop, but actually believe that any of the current crop of rappers can actually be juxtaposed with someone like Pac. In the parlance of the scientific method, these are the people who make sloppy hypotheses based on no data whatsoever, never test it out and do not perform any kind of research. But even in an ocean of fools, pearls still exist. One of those pearls has a name: Bou.

Hailing from the Rosemary Hills section of Silver Spring, MD, Bou's been making quite the name for himself in the DMV area. With his drive as an emcee, his lyrical prowess indicates that he has a clarity of thinking that's uncommon among most people his age. Having released three mixtapes, including his third one "Radio Rap, Volume 1" earlier this year, "Thesis" is the second release and the strongest in my opinion. It's a substantial display of the 23-year-old emcee's growth and increased variety in terms of topics, flows, beats and insight. Bou's proven to have a certain degree of adaptation between the old and the new. Case-in-point: "Thesis" starts off with an intro of Bou holding his own over Jay-Z's "Can I Live" instrumental. It includes a vocal sample stating, "You are watching a master at work". It's a pretty arrogant inclusion considering his peers, but it's a competitive statement and one that can't be ignored once you get all the way through "Thesis".

At the start of the "The Game Fucked Up", Bou ad-libs "You know why everybody wanna be a rapper? 'Cause they lettin' anybody rap". The man makes a valid point about the flooded, contrary nature of the rap game today: It's hard for emcees with actual talent to get into, and then it's even harder to get noticed for it if/when they do. The lyrics bemoan his fellow rappers who don't study up on their musical forebears, follow staid rap trends and the lack of unity among DMV hip-hop artists. Thoughtful and literate in his words, he makes his commentary without coming off as preachy. But this mixtape is not one in which every track is filled with statements of his own personal struggle and extreme hunger as a rapper. Wanting to "unite 'hop' and 'hip'", he shows a new school mentality that clearly took in the lessons from the old school. His versatility is in full-force on tracks like "Somebody", in which he adopts a bouncy flow spitting three narrative verses about relationship break-ups. This track included, a good portion of the mixtape is produced by Young Hustle in-house producer, JHarrisBeats, also from Silver Spring. Having also produced "The Game Fucked Up", he foregoes the 808 trap sounds there and instead flips a fitting sample on and for the hook on "Somebody":

Both producer and emcee go especially sick on "Dollaz". With a fast-paced beat propelled by sirens coupled with an infectious high-pitched vocal sample, Bou certainly goes in with plenty of clever quotables:

"Money, money, money; All I want is money
Nobody get it, I ain't never been a dummy
Steal from a nigga, it's a wrap like mummy
Bou laid back in the trap with a honey
She gets no share/Cher 'cause I ain't Sonny
Hop-Hop on the dick, Bou split like bunny
Bust in her ear, she could hear me comin'
She +Laugh Out Loud+, Bou you so funny"

Things take a deep introspective turn on "Miss You". Enlisting fellow Young Hustle emcee Kay Jetzon, he and Bou pay a lyrical tribute to a particular fallen friend from around their neighborhood. Over a mournful but soulful beat courtesy of JHarrisBeats, both men pay their respect in a way that goes beyond the mere pouring out of liquor. TruStory is the other producer on the album and laces "Just Chill". Arguably the mixtape's song for the ladies, TruStory laces well-placed piano keys to go with Bou's expression of vulnerability to a woman for whom his infatuation extends past anything physical. "End of Discussion" encapsulates all of the themes Bou conveys on "Thesis" with bluesy guitar sample as the backdrop and a lyrical assist from Kam Royal. The final song before the outro, "My Niggas", is an ode to his friends he came up with. The beat is reminiscent of Kanye West's style as it was over 10 years ago. The mixtape also includes four bonus tracks, one of which is another exhibition of Bou's versatility I had previously mentioned. "EASports NCAA14" is built off of a sample of the video game of a similar name. It also consists of Bou making references to the game while cleverly using it as an extended metaphor for his skills.

One thing I took away from the mixtape is that there are unsigned younger emcees that haven't entered this game simply because conventional wisdom deems it as a cool thing to do. The same applies to the producers behind the boards on this mixtape as well. Despite a few flaws on the album, such as an over-reliance on bass drums on some of the production, all parties involved have delivered a solid release with some areas of improvement. As time progresses, the more work Bou and company put it in, the bigger the plate will be from which they'll eat.