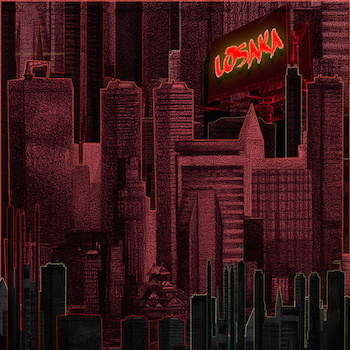 In a fortuitous bit of foreshadowing from my last Acid Reign review, I described their album as being both "avant garde experimental" and "incredibly niche." To put it another way that means that Acid Reign are incredibly unorthdox in their creativity but that's a necessarily limiting factor as to how commercially successful they can be. There's nothing wrong with that. It's a noble pursuit to eschew mainstream recognition for the sake of artistic satisfaction - making something true to your vision knowing that the return on the investment may be break even at best. You can respect the purity of that choice, knowing that there's not a single song made to pander to radio play, and that no A&R told them that AutoTuned pseudo-singing to Southern swagger beats is what will take them to the top.

The remarkable thing about Acid Reign is that they have actually taken that aesthetic and pushed it even FURTHER away from the mainstream. It's borderline suicide self-murder to attempt this and still release a commercially successful rap album, but on "Losaka" they have created "a bilingual rapid-fire affair (that) is oddly diverse yet cohesive." This isn't the bilingual hip-hop that you're used to though. Unless you speak Japanese you're not going to know what their partner-in-rhyme Gebo is saying, and the "rapid fire" description of his flow is no exaggeration. I have no problem believing even native speakers of the language might have great difficulty following his high octane fueled flow. That doesn't stop songs like "The Horde" featuring Graves 33 and Onry Ozzborn from being both beautiful and dope, but when Gebo takes the spotlight you'll have to just vibe to sound of his words over the spooky and atmospheric instrumental.

Acid Reign and Gebo have gone out of their way to procure quality instrumentation for their latest sonic experiment, and kick things off hardcore right from the start with Willie Green lacing "A Tale of Two Cities." He seemingly avoids the issue of sample clearance by jacking loops from an unnamed classical symphony, and he's arranged them in a tension inducing way that continues to build up in energy as though it's a nuclear bomb ticking down to a ten megaton explosion. Even Beond and Gajah seem to be speeding up their flows in reaction to it. Both of the aforementioned songs are textbook examples of the cutting edge genre expanding rap experiment that's being attempted on Losaka. It doesn't always work though. The DJ Nao K produced "Juicy Fruits" is too big of a wall of noise to wrap your head around, and the pluralized title seems to make even less sense once it's haphazardly inserted into the track as a form of chorus. When it does work though the fusion is amazing - such as on "Truth Sake" - where the sentiment "every song that we write is from the heart, because it resonates with those who can feel" works in ANY language. The albums 56 minutes are padded out slightly by the inclusion of "Disconnected" and "Raw Suey" remixes, but I can forgive them for it given how ambitious this project was in the first place. It's actually MORE niche than their last album, but that unapologetic middle finger to fitting in is what makes "Losaka" so much fun to listen to.