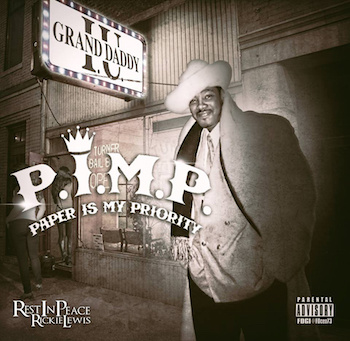 This album caught me by surprise. Grand Daddy IU is an aging rapper who was successful during the Golden Era of Hip-Hop, signing with Cold Chillin' in the early 90s. With a more playful delivery than Kool G. Rap and a decidedly tougher message than Masta Ace was kicking, the Grand Daddy sounds like he hasn't lost his touch at all.

"P.I.M.P. (Paper Is My Priority)" is as predictable as the title suggests - money talk and sexual objectification are common themes throughout. Yet, just as Omniscence has managed to make such generic street shit sound so satisfying with his latest project "The God Hour", Grand Daddy IU is another anomaly keeping the fire lit for rappers who are old enough to know better. He even raps on the opener "Listen Scratches" that "I'm showing my age but aw… fuck it". This approach to age is typical of IU's mentality, as he claims to be proud of his lifestyle on numerous blunt yet surprisingly catchy songs. "My Sh*t" and "Hands Up" are as simple as they sound, the latter in particular is merely IU boasting about putting guns to people to get what he wants.

After a strong start, the album does drift in to mediocrity until Sadat X joins IU on "She Said" for a bombastic collaboration that sees both veterans explaining why their lady has taken an interest in them. IU shows his age directly on "That Old Soul" as he thinks back to when soul music was both excellent and popular, while also thinking back to how his parents instilled an entrepreneurial mind state in to him as a youngster ("Get Ur Own").

Thematically, Grand Daddy IU isn't bringing anything new to the table, but he does ensure that it's delivered in a satisfying manner. The beats here are decent to good, and the self-proclaimed pimp himself is a commanding presence who doesn't try anything spectacular. His return hasn't been greeted with much fanfare if any, and while his latest album does have some played out, forgettable tracks on it, there's enough of that street swagger and authoritative presence to let the listener forgive some misgivings.

"P.I.M.P." is what you would expect a modern Big Daddy Kane record to sound like. The Grand Daddy is notably more abrasive and incredibly ignorant, but as far as New York rap goes, this is a rewarding listen that's packed with the type of character and playful attitude that you come to expect from an emcee whose career stretches back to the golden days of Hip-Hop.