:: BRBRCK
as reviewed by Sy Shackleford 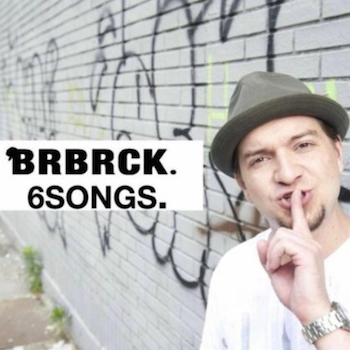 I happened upon this EP a while back. I listened to it in full, but its review bug didn't bite me until just recently. Of all the EP's I've reviewed this year, this one is perhaps the most well-rounded even with its rough edges. Scranton, PA-born, Brooklyn transplant BRBRCK produces and raps on all of "6Songs". In regards to the track length, it bears parallels to the notion of six degrees of separation. The EP is a mere sampler and, as such, all six tracks each represent some facet of BRBRCK.

As an emcee BRBRCK man can spit. He's got flow and some pretty clever punchlines, but his true lyrical gift is his ability to stay topical. Each track has him going in with both a melodic precision and an astute wit on different topics. As a producer, I think that some of the beats are better than others. This listener feels that he's got an idea for his own sound, but it's not yet fully realized. The first single, complete with an accompanying video, "Hood High", serves an example:

Lyrically, it's a marijuana anthem, but with a clever spin: "Gettin' blunted on a budget". He's included some well-timed samples to sync with his flow, which, on this track, consists of a demonstration of well-honed breath control coupled with internal rhymes within densely-packed bars. It has several clever double entendres ("Dub sack hip-hop, call it 'blunt-rap'") and the production draws from so many sources. There's an urban saxophone looped throughout, and that fits fine. The snares could've been harder and I think I heard a video game sample later in the song. The point about the production on this track is that its myriad elements give it just a slight inconsistency. "Real As It Gets" is built on a somber guitar riff with drum programming that switches often. The lyrical theme is about how contrary real life is. How it's messed up, awesome and fair all the same time. BRBRCK's lyrical showcase is brought forth on the MCK-assisted "Paris Hilton Hustle". Starting off with clock ticking, synth strings and a high-pitched vocal sample, this track contains some of his most clever rhymes on the EP:

"Baddest motherfucker not named Shawn Carter
Bat shit like Bruce Wayne, but smarter than Peter Parker
I'm the one making you dance like Ed Lover
I'm a writer, rapper actor... white Donald Glover
...
I am more hood than I can explain with out you laughin' at me
But keep laughin' and my boys'll stretch you like some Laffy Taffy
I'm Daffy so Duck, motherfucker you just woke up"

MCK is awesome with his flow and vocal control. From a technical standpoint, he had the better verse. Production-wise, the raindrops at the end were a nice touch, with the metaphor of putting work in no matter the weather. "Bedford Stop Blues" has production that sounds like a Jimmy Jam 80's rock song (up to and including the female on the hook), but with rapped lyrics. BRBRCK channel's some 60's classic rock on "Before You Leap", and caps off the EP with a reflection on foreign affairs. Entitled, "Stones of Freedom (remix)", it's marked by its dark production over a lyrical account of his journey through the middle east. Of all the songs, it's the closer that contains the best production.

On the whole, "6Songs" is a solid EP. I think the production can use some improvement on the next outing, but its birthed from an artist well-aware of his strengths, his limits, and how to transcend them.