King Magnetic :: Timing Is Everything 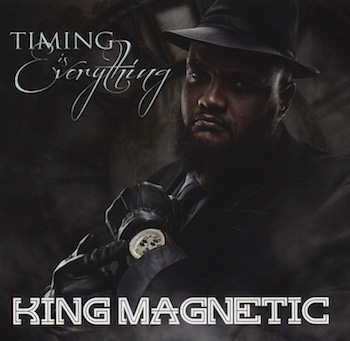 Of all the Philly-based underground rappers linked with the Jedi Mind Tricks/Army of the Pharoahs clique, King Magnetic is one whose gradually improved over time, particularly in terms of the production he uses. With "Timing Is Everything", King Magnetic has assembled an all-star line-up of underground heavyweights, to deliver a debut album that hopes to capitalise on the momentum his "Everything's a Gamble" series of mixtapes acquired.

The album starts off all guns blazing, as Amp laces Magnetic with some Preem-like instrumentals in "Timing Is Everything" and "Numbers" - the latter including one of the better Jadakiss performances of late, despite sounding like he's just crawled in from a night out gargling razors with Vinnie Paz. DJ Premier himself produces "Status", which feels relatively throwaway given how strong the PRhyme album was seven months ago. Even on an off day though, Premier proves to be better than any of the copycats providing Magnetic with the majority of his beats:

It's certainly one of the best sounding street rap albums of the year, but King Magnetic's presence is undeniably divisive given his monotonous delivery and one-dimensional themes. He is a gifted writer though, and his complex flows are worth checking out on "Believe" and the intro track - which both boast satisfying, DJ Express-assisted, scratch-heavy productions. Rapsody blesses "Kidnapped" with some storytelling of the obsessive fan variety, the fan being King Magnetic. It's an old concept as Rapsody says herself by calling Magnetic a "Stan", but it's hard to take too seriously with Rapsody spitting "damn, you a big motherf*****" and requiring a harpoon to kill him (Magnetic is 6'9"). Block McCloud lends his crooning skills to "Wanna Be Loved", which isn't far off of a Big Punisher track with its relentless, almost breathless lyrics and sexual connotations. It also possesses the Pun-style humour ("I ate her out, doesn't mean I'll take her out") which is essential on such a fierce, braggodocious album: I'll always remember the Sean Price line "rappers can't fight so they rap about guns", and Magnetic's "Tuff Guy" is proud to admit that he isn't a tough guy, because being strapped is effectively a trump card no matter how tough somebody is. Given the amount of people dying from guns recently over ridiculous reasons, it's the one moment on the album where the timing could have been better. There's also some cringeworthy material, most notable being the Big Shug vocals on "Ugly" which are akin to hearing your dad singing at a wedding. It's a shame, because the Diamond Legit beat is solid and Magnetic throws down some witty bars ("use her to play games, sorta like an X-Box, did a 360 and now she's my ex-box").

King Magnetic surprised me with "Timing Is Everything", as he was never one of the guys I'd buy an AOTP album for. Ironically, the decision to keep guest appearances to a handful is wise, and ensures the listener absorbs Magnetic's rhymes, and while he may not be the most captivating emcee, he isn't boring either. Production isn't formulaic, and only a few tracks have DJs scratching acapellas in, which is great to hear. King Magnetic has delivered a well-rounded, strong debut that knows what it is and does what it needs to in a consistently satisfying manner.