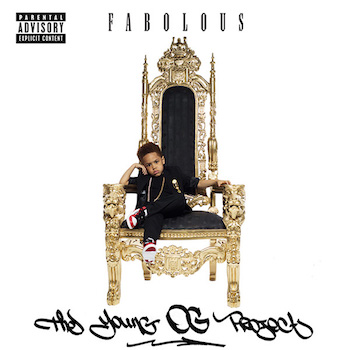 A reader recently posed the question "Why did you overlook 'The Young OG Project' by Fabolous? Y'all reviewed all his other s#%@." He didn't use those exact words, I'm paraphrasing a little bit, but the gist is the same - it didn't make any sense. I gave the standard response that some of you may have seen when asking a similar question, and it goes a little something like this: "We're a small staff, the rap game is bigger than ever, more stuff gets released than we can keep up with, and occasionally things fall through the cracks. We'll add it to our to-do list."

Now let me go beyond the standard response here and get a little bit more real - I just plain forgot about Fabolous. He hadn't released anything major since "Loso's Way" in 2009, and while he had a bunch of mixtapes in the interim like "The S.O.U.L. Tape" and "There Is No Competiton" (including sequels to each) I wasn't really checking for them. It's that kind of hip-hop landscape any more, where so many mixtapes get dropped that if you don't see one, you don't necessarily notice that you never saw it. I think it might even be fair to say I just didn't care. That's certainly nothing against John Jackson. I initially described him as a "vexing rapper" who didn't live up to his hype, but within a couple of albums I was a convert to his style and felt he was well established as a rap star.

In hindsight I believe I operated under the misguided assumption that Fabolous had peaked and was in decline, lacking the material to release a full album or a record label with enough faith in said material to put it out. After all mixtapes are a cheap and easy way to keep your name out in the public - you just rap over whoever has the flavor single of the month/season with your own bars and put it out there for the DatPiffs and LiveMixtapes of the world to run wild with it. It's not that rappers don't drop hot 16's on these mixtapes, but having completely original material in beats AND production would almost be a mistake. Why would you pay for some tracks for something you'll just give away?

At first when listening to "The Young OG Project" I thought that Fabolous had forgotten this was an album and not a mixtape when I got to "She Wildin," as within seconds it sounded like he was going to rap over "Oochie Wally" by The Bravehearts. A few seconds into the song and it's clear that The Superiors and Count Justice sample from it, but do not simply loop it ad nauseum, and Fabolous is actually using the original hook as a clever play on words. Say it fast and "oo-chi-wally" can sound like "ooh-she-wildin" so far from being a simple mixtape track it actually turns out to be a clever tribute to the original with a brand new spin. The only regrettable thing is Chris Brown being on the hook. I realize his probation for assaulting Rihanna finally ended back in March, but for the rest of my life I'm never going to be able to shake the image of what he did to her from my mind, no matter how much he apologizes or how much community service he does.

Fortunately "The Young OG Project" is eleven songs deep and Chris Brown only appears once, so much like the general public has we can skip over his misogynistic actions and move on. Fabolous' time recording mixtapes between major releases has had two advantages - his flow has stayed relatively sharp and he's kept an ear to the street for who else is dropping mixtapes with hot 16's. That makes collaborations like Fabolous and French Montana on "Ball Drop" inevitable, and The MeKanics & OZ give them a good instrumental to work over. The background percussion knocks around like a ball bearing in a wooden maze, and combined with a whining sample like a caterwauling cat it has a surprisingly hypnotic effect. One of F-A-B's strengths has always been his knack for choosing the right producers to work with. "The Young OG Project" is a hodgepodge of different names, with no one individual producer or team dominating the landscape, but everybody giving him their respective hot tracks. Vinylz and Boi-1da lace the menacing piano backdrop of "Bish Bounce." Phonix Beats creates a very Future-esque sound for "We Good," and not surprisingly Jackson sings and AutoTunes over the track. Young gun producer C-Sick provides one of Fabolous' most mesmerizing beats for "Rap & Sex," one of several points on the album where Jackson clearly pays tribute to Shawn Carter.

"Got a condo with nothin' but condoms in it
Same place where the rhymes were invented
So all I do is rap and sex, imagine how I stroke
See how I was flowin' on my last cassette
Shawty came through just to hear the mixtape (Soul Tape)
Ended up starrin' in a sex tape {ohh!}
With a player from New York no Knicks tape (swish)
Might need your bitch for my next day (hah!)
I come upstairs then I come get them drawers
Come back downstairs then I come up with bars"

Despite using the above quotation for the Jay Hova illustration, my favorite bar on the song is actually "No slow jams, just street nigga rap; want R&B smooth? Get a R&B dude." It describes Jackson's personality and swagger well, but the downside of his swagger is a casual misogyny where every woman is a "bitch," and the old O'Shea Jackson and Todd Shaw excuses that "if you're not one it's not about you" seem to be wearing a little thin in 2015. It may not be about any individual woman specifically, and we have to acknowledge that not all women act like ladies (nor do all dudes act like gentlemen), but creating a casual air of disrespect toward feminity seems so unnecessary for hip-hop at this point. Disenfranchised men don't need to subjugate women just to get a leg up at opportunity, and it doesn't mesh well with having guest stars like Abir Haronni on "Young OG II" either. She ain't no bitch.

Despite that fact Fabolous remains comfortably caveman on the track. "Swear these hoes make me numb/Only feelings for this bitch 'You been shoulda gave me some!'" "Hoes gon' be hoes, they just hate admittin to it." This is really the only big knock I have on "The Young OG Project" other than the seemingly contradictory album title. If you're an OG you're old, and at 37 Jackson is twice the age of most of today's rappers trying to make it in the game. He's probably trying to imply he's a "younger" OG, meaning he's not grandpa sitting on the stoop cursing at the kids to pull their pants up, but at the same time "young" seems accurate since his attitude about women is surprisingly underdeveloped after all this time. We aren't that far apart in age but I'm no longer inclined to just dismiss sexism or homophobia as an acceptable part of hip-hop culture. We can all do better. And "The Young OG Project" is a good album, but I've heard Fabolous do better, so I know he's got more than he showed us here.