:: Left of Center
as reviewed by Grant Jones 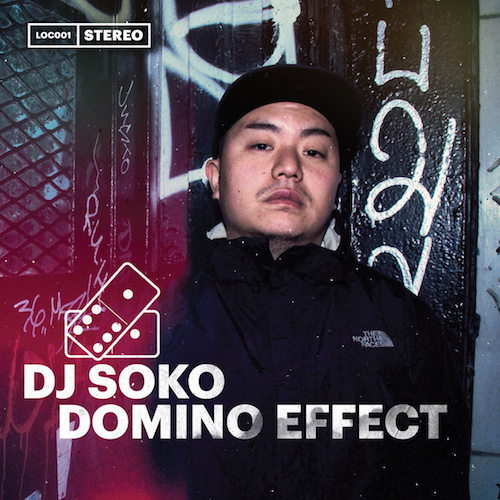 Not a year goes by nowadays without Detroit laying claim to contributing significantly to the year's best releases. 2015 is no different, with Guilty Simpson, Apollo Brown and Clear Soul Forces all providing excellent albums - there was even a good Slum Village album. In 2010, one of the best albums that year was The Left's "Gas Mask", a brutal yet distinctly soulful collaboration between ever-reliable Apollo Brown, Detroit emcee Journalist 103, and the largely unknown DJ Soko. That album was stitched together by Soko's scratching and his debut album "Domino Effect" sees a similar approach, with Soko himself not producing any of the tracks.

In that respect "Domino Effect" is more along the lines of the thumping "Picture This" from DJ K.O. with Soko tying the beats and rhymes together with his scratching techniques. This album isn't about turntablism, but Soko certainly knows how to cut and scratch. I've talked about DJ K.O.'s "Picture This" in previous reviews, and that's because it's one of those albums you show a friend who wants to 'get in to' Hip-Hop. I'd throw the second Soundbombing album in there too, and DJ Soko's "Domino Effect" wouldn't look out of place on that list either. It's better than it perhaps has any right to be, given the abundance of compilation records that feature a who's who list of underground veterans on the mic.

Def Dee's "Take Notes" is a ferocious monster of a production that will probably have you headbutting the nearest child. Not to be outdone by Apollo Brown, Def Dee provides a classically Detroit instrumental that sounds like something left off of The Left's "Gas Leaks" record, itself a collection of leftovers. Unfortunately, it ends up overshadowing the three emcees (Hassaan Mackey, MarvWon, Finale). This isn't a lone issue, as there are so many dope beats on "Domino Effect" that the lineup of prominent underground emcees inevitably have to try and match the ferocity. Nolan the Ninja approaches "Concoction" with a shout-y style reminiscent of Lord Lhus, but it drifts towards forgettable street rap.

Jae Musick and Soko combine to lethal effect on "Shadow Boxing" so much so that I'd like to hear more from the two together. It's similar to Sha Stimuli's best work, whereby you fear what condition the sound booth was left in after the recording session. As good as these hard-hitting tracks are for pumping weights to, the good albums are held together by the surrounding songs. Thankfully, there's some gems scattered throughout that highlight why this project got its name. Guilty Simpson continues to remind listeners why he is one of the most consistent artists in Hip-Hop with "Kyle Reese" (a Terminator reference). Def Dee is at it again, delivering a beat that throws a hefty nod towards J Dilla. Slimkat78 (of The 1978ers) gets in on the act with the aptly-titled "Confrontation" and "Building Bridges", the latter unfortunately just a collection of voicemails from the likes of Novellis, Def Dee and Journalist 103. The one criticism I can throw at the project is that Soko could have left his mark on this album by mixing the tracks together, a la DJ Babu's Duck Season records. As it is, it's a fine selection of underground hip-hop featuring DJ Soko. Having heard his work on Mello Music Group's Self Sacrifice compilation, and The Left's "Gas Mask", maybe my expectations were too high, or my nostalgic side is yearning for another mix-CD, which seems to be a dying art. Instead, I'm thankful that artists, particularly from Detroit, are still putting out energetic Hip-Hop with a distinct flavor.