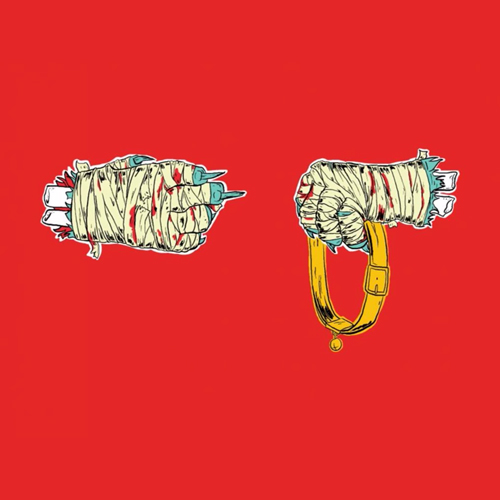 For those who don't know the back story, Meow the Jewels started out as a joke. El-P and Killer Mike offered a selection of pre-order packages for Run the Jewels 2 last year, including the facetious offer to re-record the entire album with cat noises for $40,000. Even though there was a disclaimer explicitly stating no pre-orders valued over $35,000 would actually be honored, a Kickstarter to fund it was launched and El-P finally caved in and said that if it hit the goal he'd give all the money to charity and see to it that the album was actually recorded. It's worth nothing that El-P is a fan of cats in general so it probably wasn't too hard to talk him into it.

At some point Kickstarter backers had to wonder if this joke turned reality had turned back into a joke at their literal expense. The Kickstarter's campaign page stopped being updated back in January, and although there would be a periodic promise from El-P on Twitter that it was nearing completion, there was no proof whatsoever. Then unexpectedly last week the entire album dropped for free online, which was welcome news to those who had pledged $10 for a digital copy, but anybody who put down serious money for an otherwise comedic concept still has no word on if they'll receive their catnip, stickers, t-shirts or matchbooks. If you pledged for more than a copy of the album I'd take that up with the Kickstarter campaign or the Kickstarter website itself if you don't hear anything in a week or two - as for me I'm just glad the album exists.

Real producers were brought in to do these cat noise remixes, so this joke actually has legs - more than four of them in fact. Prince Paul, Just Blaze, Dan the Automator and El-P himself actually took the time to sit down in a studio and listen to cat sounds thinking "How can I make mix this with the vocals from Run the Jewels 2 and create something listenable?" Like a bag of your cat's favorite treats, the results are definitely mixed. That's nobody's fault really other than any of us who took this joke further than it should have gone, with the promise of some good coming out of the internet having a good laugh. SOMETIMES it actually works though. The BOOTS remix of "Early" takes one of the original album's most haunting tracks, with Killer Mike being harassed and roughed up by the cops in the first verse, and doesn't make a joke out of it. The sound of a cat's purr becomes the new bass, other cat sounds become percussive beats, and others are chopped up or stretched out in a way that really does make sense musically speaking. It's odd as hell but damn it, it works. Other times it's just too much of a stretch. "Close Your Eyes and Meow to Fluff" was a good attempt by Geoff Barrow, but completely sheds the angry growling intensity of the original like cat hair all over your couch. "Paw Due Respect" is funny but seems entirely mismatched with Killer Mike yelling "punch him in his s--t again" - perhaps it would have been better as just an instrumental. Automator's reputation precedes his track but you can't improve upon the perfection of "Angeldust" and stripping out the fast tapping beat, clinked glasses, snarling animals, chopped up singing, symphonics and the broken piano playing at the end erases the track's soul. And again while I appreciate the actual effort that went into making cat noises into a real melody, it's probably easier to appreciate Alchemist's hard work on "Creown" if you've never heard "Crown" to begin with. I'd like to say again for the record that for humor value alone, "Meow the Jewels" is amazing. It's amazing that they did it as a pre-order thinking nobody would take it seriously, it's amazing that someone did and funded it, it's amazing the album actually got made and release. You can't buy comedy that good - except in this case we did. The entire internet collectively made this happen. And despite the fact this is in large part a good laugh some of these songs really do sound dope as cat-centric remixes. The minimalistic revision of "Love Again" as "Snug Again" by Little Shalimar takes a bawdy song about getting some P and may actually make it doubly dirty - the double entendre is now literal and Gangsta Boo still kills it on her verse. I'm not shocked Prince Paul found a way to capture the original intensity of "Lie, Cheat, Steal" even using cat sounds - even managing to imitate the melody of the chorus in an effective way and the instrumental dropping out to almost nothing to open verse two. The amount of enjoyment you take out of this is undoubtedly directly proportional to the amount of money you put into "Meow the Jewels." If you're downloading it for free then you probably think it's fantastic fun. If you backed it at the $10 level (as I did) you'll think it was good for a chuckle but probably not something to listen to more than once or twice. If you put down some serious coin as a backer, well sir or ma'am, you should have known it would either never happen or turn out something like this if it actually did. I'm not mad at it, because the original is still dope, and they gave that one away free too. This one raised money for the families of victims of law enforcement abuse, so if it takes an album full of cat sound remixes to achieve that positive outcome it's worthwhile no matter how good the end result musically actually is.