Big K.R.I.T. :: It's Better This Way :: DatPiff
as reviewed by Emanuel Wallace 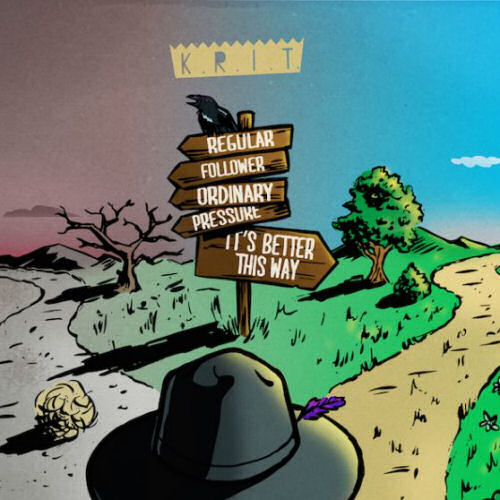 It's been nearly one year since Big KRIT released "Cadillactica," his second album on Def Jam. While many critics lauded the effort and the LP debut at number five on the Billboard 200, KRIT hasn't managed to garner the commercial success that someone of his caliber deserves. Unwavered, KRIT has continued to make the music he enjoys creating with the likes of Raury, Trinidad James, David Banner, Scotty ATL and plenty of others. On the heels of his 'Kritically Acclaimed' tour, Young Krizzle dropped "It's Better This Way" out of the blue on DatPiff. The project is narrated by DJ Drama and produced mostly by KRIT with a few contributions from Kenneth Whalum III and Wolfe de MCHLS. Featured guests include Scar, K. Camp, Young Dolph, DeLorean, BJ the Chicago Kid, Ludacris, the legendary Warren G and of course, Big Sant.

The project opens with KRIT trying to start up his beloved Lucille to no avail before deciding to walk to where he's trying to go. He's at a fork in the road and while he enjoyed the path he took in the past, he decides that he's going to take a different route this time. The music kicks off with the Kenneth Whalum-produced "King Pt.4," and just like with previous installments of the "King" series, KRIT takes the opportunity to get a boatload of grievances off of his chest. He questions the reasons why others seem to get so much praise for mediocrity while others go unnoticed even though they are just as talented, if not more. He's getting to the point where he's beginning to come to grips with the situation. "Way too much chasing/ they'll never give me what I deserve. Just face it," he says with a conviction so strong that it almost seems believable. Rapid-fire claps and a haunting soul sample drive "86," an anthem that not only pays homage to the year that KRIT was born but also to the vintage custom Chevy Monte Carlos from that model year as well. The Regulator himself, Warren G, makes an appearance on the synthy 808-propelled feel-good jam that is "No Static." The Bill Withers-sampling "Piece On Chain" is KRIT at his shit talking best. The Wolfe de MCHLS-produced "Shakem Off" features K. Camp and a rejuvenated Ludacris who's back to rapping like he did when his then-trademark afro would blow in the wind. Perhaps it's only right that he does, being that the sample for the song is his own "Catch Up."

There's always a certain pattern for KRIT projects and he doesn't drift too far from that here. It starts with the crunk bass trunk-rattlers before delving into deeper and sometimes experimental territory and then the mood lightens once more before we ride off into the sunset at the end of it all. The Mason-Dixon line of this project is drawn between "How Bout That Money" and "Into The Darkness." The former features Memphis' own Young Dolph and is standard fare southern braggadocio, while the latter slightly feels like foreign territory. Wolfe de MCHLS leans heavy on the AutoTune and it feels more like his song than KRIT's. "Vanilla Sky" follows and just like the Tom Cruise film of the same name, KRIT lives in a world where things are just a bit different. It's a soft jazzy number that floats by so gently before being interrupted by what one could perceive to be reality. "Got Me Thru" features DeLorean, Scar and an excellent verse from Big Sant but it's KRIT with his moments of humility and determination that steal the show, as he raps:

"Pushin that Maxima, with no cash in there
Fresh tee so I didn't fasten up my belt
Back then I was jammin myself
Like 'Who the fuck gon tell me I ain't gon be one of the best they ever heard?'
Sippin' 211 on the curb, rolling dime sacks of that herb
Then blow it down, What you know about that Greyhound on I-20
Off the porch and out of pennies, selling CDs outside Magic City
That's dedication, preparation, my presentation is playa made
Clockin in like Flavor Flav, I'll sell the lemonade stand lemonade
[...]
Thanking God for that place to stay and them showers...even if they cold
Them nice women that cooked me a plate for free...even if they hoes
So I don't take for granted steak and shrimp, leave a healthy tip on the side
For all the times God showed me love...even when I couldn't pay my tithes"

BJ the Chicago Kid lends his vocals to the ambitious and hopeful "Can't Be Still" as Krizzle encourages the listener to get all they can while they still can while maintaining a sense of dignity. Things start to wind down and get back to the trunk-shaking side with the bass-heavy "Keep It Boomin." The closing seconds in particular will make even the most pedestrian car audio system seem as if there's an amp and woofer box in the trunk. KRIT finally makes it to his destination and it's time to celebrate with the apropos "Party Tonight" and it's all about enjoying each second of life as if it could be the very last one. The project closes with the title track and it finds Krizzle doing his best to unlearn and deprogram all of us who have been brainwashed into loving the music that is spoon-fed to us on an ongoing basis, as he raps:

"This that KRIT, remind you of that shit you used to play
In your parent's car, had you feeling as if outerspace...
Was in your atmosphere, ATLiens was all in your ear
Tired of being Outkasted, I hope that means you outta here
Nowadays we flex so much, get a check so much, we never chill
Way too drunk to drive, high as fuck, plus we poppin pills
Celebrate the very shit that slows us down and probably kills
Song ain't even jammin though, number one in every field
Got that on repeat, right before you wake, on your way to work
On your way to church, stuck in traffic, right before you go to sleep
I know you tired of that overdrive, that commercialized sing-along
Wonder why they play that song all the time"

To be fair, there's probably someone sitting up high in some office who has an answer for that query. Perhaps it's someone like LA Reid or Lyor Cohen or someone like that, but it's a question that many others have wondered about as well. Sometimes the path to success isn't the easiest or most popular but it's clear to see that Big KRIT finds some sort of solace in taking the road less traveled. Whether it ultimately pays off is yet to be seen but along the way he has earned the respect of some who may have incorrectly dismissed him as some kind of country bumpkin. He's a slave to his mission and when it's all said and done, he's confident that you will see him for who and what he truly is as an artist. The project can sometimes be a little heavy on guests but the vulnerability and willingness of KRIT to step out of his comfort zone on this and perhaps future projects without compromising himself can only impact KRIT for the better.