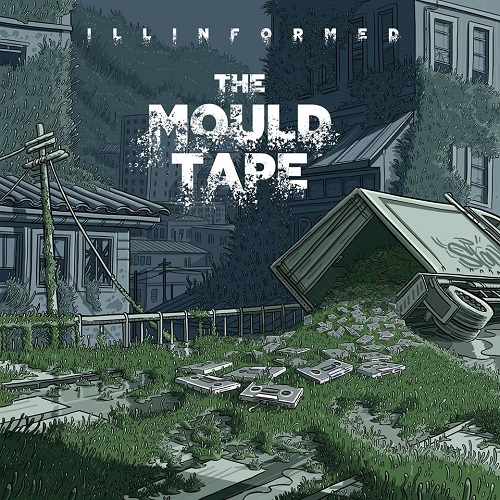 Music fans should avoid letting themselves be misguided by comparisons, but sometimes the shoe just fits too perfectly to not carry on with the comparing. Our publication has already alluded to vocal similarities between London-based Leaf Dog and hip-hop legend B-Real from Cypress Hill. Collaterally, producer Illinformed caught a Muggs comparison in the same review. My introduction to this specific group of artists, "The Mould Tape" instantly makes me reach for even more Soul Assassins comparisons. Eric The Red is the Son Doobie to Leaf Dog's B-Real, and in case they don't take kind to the comparisons, they should not rap over Illinformed beats inspired by Cypress Hill.

Only that this is probably exactly what they were going for. The three aforementioned are actual brothers, opening "The Mould Tape" with "Where's the Bud." With its jittery horns and an undefined kind of jingle, Illinformed's beat is the type of sonic nuisance that sounded so good to a hip-hop head's ears in the early '90s. Not every beat screams Soul Assassins, but the horns often blare characteristically, and to pay homage was clearly a conscious decision taken for Illinformed's first compilation because none of the instrumental projects he released in the past couple of years (which are all worthwhile, by the way) sound like this. Having thus proven his versatility (also with production for Jedi Mind Tricks, Vinnie Paz and Ras Kass, as well as local heavyweights like Verb T and BVA), Illinformed is permitted a trip to the Temples of Boom.

BVA, a key member of the clique who's also in groups Brothers of the Stone and The Four Owls, takes a more deliberate approach, looking for the method in the madness on "Still Slippin," whose chugging drums and wandering bass leave enough room for his reflections on the potential positives of drug use:

"Livin' life like a rodent
Comin' out at night to forage for scraps of potent shit to be smokin'
No shit promotin', smoke a blunt that's honey-dipped and soaked in
oil, no foil - but look like I'm on opium
[...]
Still gettin' a buzz, feelin' semi-concussed
Slip inside my mind, reelin' off the heavenly dutch
Things'll happen that'll send you spiral into the clutch
of the dark forces that'll squeeze till everything you see's fucked
Slippin' off the edge, man, he's off the head
Strange look in my eyes, sad and broke and on the ledge
Snap out and the picture you see's beautiful
And walk the streets feelin' like the world has found a use for you"

If a visual image forms before your eye when you listen to the rappers on "The Mould Tape," it's likely that of scrawny, scruffy types. The lyrics corroborate this image in various ways. "War Drum" presents an entire line-up of pesky pests who achieve intimidation through alienation. Eric The Red for instance snaps, "Do I not look a cracked out paranoid guy? / Who will do anything to get high? / Like breathin' in mould dust, start eatin' fungi!" And as the hallucinational horns steadily fade in and out, quite a cautionary effect ensues.

For the reminder, Illinformed calms these savage beasts with musically more moderate servings. He helps veterans Sonnyjim and Fliptrix get their groove on with the homely "Blunderbuss" as DJ Getts cuts up "Tru Master" quotes. BVA and Leaf Dog make their way through the cobwebs of "Back Down" and have an insightful conversation in the interim. The experimental "Everything to Gain" is the most likely track to trigger memories of Cypress Hill's "III: Temples of Boom." Jam Baxter waxes philosophical to the sounds of a bleary-eyed jazz band in the early morning on "Half Dead." Negative examples include "Nine to Five," a frustratingly undecided beat with mechanical drum patterns, or "Gutter Funk," which trots along without motivation and is only saved by the colorful accents of Bill Shakes, Physiks and Sean Peng. More importantly, seeing how a number of artists who participate on "The Mould Tape" look back in time, its overly clean sound can be irritating, belieing both the project's title and the era it references.

On the upside the album flows smoothly, at times even seamlessly, Illinformed evidently possessing an ear for all aspects of quality rap music. Especially the final third regains traction with the dynamic double punch "Long Nights" (featuring the only American appearance, by Q-Unique) and "The Platoon" with Bristol massive Split Prophets. Unfortunately Illinformed misses going out on a high note with "Gettin Mouldy" as vocalist Jman is faced with generic strings and drums that are anything but mildewy.

Arguably "The Mould Tape" is a cohesive affair in terms of themes and attitude. The MC's are largely on the same wavelength. Of course 'mould' not only represents the potentially toxic fungus that lives off organic matter, it also stands for weed in this case. Herb is almost existential to them. (As Smellington Piff raps on "Long Nights": "I was raised from the ashes / of cannabis and hashis.") Also the underground spirit is strong, the no-sell-out vibe at least perceptible. ("Naturally we rep for the rejects and defects," states Leaf Dog on "Nine to Five.") Aside from a healthy distrust in social norms, the lyrics often boil down to irrelevant rhyming from rappers who are still a few steps away from acting their age. Two tracks stand out due to more mature performances. Cheech and Stinkin Slumrok exhibit skill and character on "Blunt Rock," which simmers with horns and organs reminiscent of early tunes from Roots Manuva and Blak Twang. "Smokey" features two seasoned rappers (Verb T, Life MC) who are truly at peace with themselves, compared to the majority of MC's in action. Illinformed and his friends would do well to go back to Muggs' "Soul Assassins" series and ponder the full possibilities of such producer-helmed compilations. Either way "The Mould Tape" should appeal to fans of Swollen Members, Gangrene and other acts located in the darker and danker recesses of rap music.