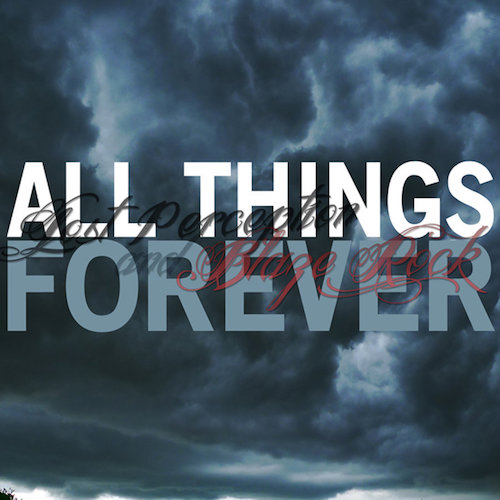 At first I believed I must have been sleeping on the latest releases from Lost Perception since we hadn't reviewed anything he had done since 2011. After a glance at his Bandcamp page it turns out that's not the case. I would have expected a producer of his skill to be dropping an album or three every year from then 'til now, but all that he's made available online are "Black Materia Instrumentals" and this new album with the emcee Blaze Rock.

I'm not sure "new" is necessarily right either though, since further research turned up several references to this album being worked on in 2013, and at least one dating it back to 2011. It's even possible that this album was available for a while, pulled from distribution for revision, and just now released again to the general public. Unlike most "new" releases I receive there's no press sheet or bio attached to explain what's going on. This just showed up in my e-mail unsolicited with a link to the artist's page, so what I know about Lost Perception is based strictly off him having worked with Random in the past. For Blaze Rock I must apologetically admit I have no background on him at all.

There's a religious overtone to "All Things Forever," and not just because of the fact he raps about angels and demons in the first verse of "Since We Never Spoke." The song titles themselves paint a larger picture on this hour long album, and a few of the tracks are entirely unapologetic about their Christian basis with or without those titles. Even if you were struck blind and dumb you'd have a hard time missing the point of Blaze Rock's "Do You Believe" unless you were also robbed of your hearing.

"I am a king! Heavy is the head that must wear the crown
but - heavier is the king when he's, carrying this whole town
I am a monster! Ruling with an iron fist, running with divine interests
Stunting while you liars SLIP!
I am a warrior! Fighting 'til all, fall at my feet
Glorious in your defeat, I am the stories in your sleep
I am electric, in the maker, creating, the breakers faking
Of those hating, never foresaken - you will awaken!
C'mon - do you believe?!
I am a God in the flesh, or posessed by his breath"

The nice thing about Blaze Rock is that he's a bit braggadocious about his faith. A lot of religious rappers take a "meek will inherit the Earth" approach to their flows, whereas Blaze "brings the Gospel like it was written in rhyme" by his own admission, and attacks each instrumental with the passion and fury of Sticky Fingaz. That also makes it more intriguing than your average Xian album of biblical references and parables. When he does calm down and deliver the flows in a measured manner, you can still hear the excitement in his voice bubbling just beneath the surface. "Suicide Serenade" also shows he can sing at least as well as Everlast. One of the reasons this album might have been out of circulation for a bit was the track "Hail of Demons," which seems to tread on exactly the same ground as "One Winged Angel" from the "Black Materia" album, with the same sample and an obviously different line-up of rappers. I'm sure if this was an issue that Ran (a friendly affable dude) was more than happy to work it out, and if not then it's totally unrelated and I'm just randomly (ha) speculating. Still it's odd to hear Lost Perception go to the same well twice on two different albums - once was enough. It's possible that the heavy evangelical fervor Blaze Rock injects into the tracks of "All Things Forever" might be a little much for some. It even has a surprisingly dark note on tracks like "Jesus Can't Save Everyone," which seems to reject the precept that even the most unrepentant sinner can't find his way to the Lord by humbling himself and praying for forgiveness. Then again it may be that Blaze Rock is speaking strictly about his own salvation, the believe he can't rise above his own devilish ways, punctuated by the movie samples that populate the track. On the whole I found "All Things Forever" enjoyable, though I'm still mystified as to what the real release date of this album is, and/or what the background of Blaze Rock is. Most likely I'll get an e-mail about it - I usually do when I fill a review full of questions I don't have answers to. This album probably wouldn't rise as hard without Lost Perception's beats, but it raises Blaze Rock above the generic Christian rapper and puts him into KB territory - a religious artist who can cross over into the secular musical realm.