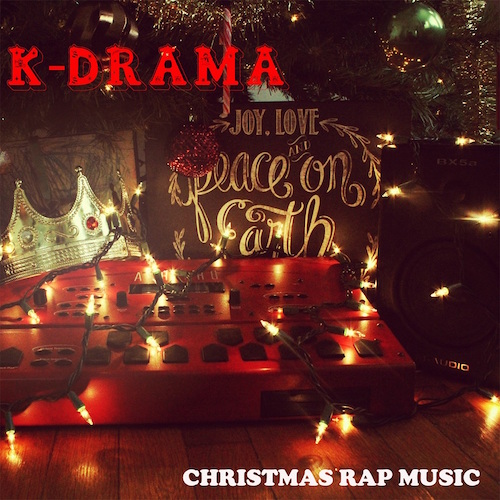 Christian rapper K-Drama probably wishes writers would stop writing reviews with "Christian rapper K-Drama" as the first three words of the first sentence. You form preconceived notions of the person you're about to read about for better or worse before we've even gotten to the meat of the review. The thing is that just like any other genre of hip-hop from trap to boom bap there's a wide variety of quality and no one artist who can speak for all others who perform in a similar style. You can't make an assumption based solely on one descriptor and expect it to accurately apply in all cases.

That said K-Drama is a rapper who could clearly be successful as a secular emcee if that was his calling, but he's chosen to be a man on a mission for what he believes in, and it's not a mission to pop more champagne than a victorious World Series team. The pastor might pop a little communion wine for him - who can say - but he fits squarely in the tradition of Christian rappers who give glory to God in the highest. If you're non-religious this might be the time to check out now, but if you're unoffended by hearing people use their inalienable right to free speech regardless of which religion (or none) they profess to believe, read on to learn about "Christmas Rap Music." I always get nostalgic for Christmas music around this time of year and "We Three Kings" is the kind of song that could become your new holiday classic. Charde Jones and Naima J build on the familiar melody while K-Drama does some inoffensive rapping about his Lord and savior.

"What lengths are you willing to go to get to Jesus?
The magi travelled far, believing that they have to see this
Will you wrestle the truth or just believe a lie?
Do you want to be fulfilled or are you content with gettin by?
I encourage you - go beyond your festivities
If you put your faith and trust in him, he'll never leave
Be a wise man, follow the light!
And you'll find what you're lookin for..."

If Christmas carols aren't your speed though "All Year Long" might be more what you're looking for. He even admits in mid-verse that "this don't sound like a Christmas song" and he's absolutely right - this song is a heavy hitting bass bottom (and slightly repetitive) loop that sounds more like the Dirty South than his native Cincinnati. K-Drama is firm in his conviction that "Christmas isn't about a baby in a manger" despite the theme of many nativity scenes this time of year. In his view the Christmas season's real purpose is to reaffirm your faith in God, which is exactly why he does it "All Year Long" and not just December 25th.

For those of you still with me after "Christian rapper K-Drama" opened this review, feel free to click the link above and listen to what K offers for himself. As you'll find out from "Thumpety Thump Thump" he's a traditionalist when he comes to hip-hop. "I'm on my full ride, this music let it knock/If I had some subwoofers you would hear me down the block/grew up on rap so I like them thick kickdrums/that make a smooth boom sound when it hums." I'm down with what K is pining for here - Christmas music that has a little more bass for your trunk when you're driving around. Though this is a short (and free - donations encouraged) holiday album, it's exactly the change of pace I need from Bign Crosby and Mariah Carey this time of year. The good news is more than just the New Gospel in this case - it's that you can enjoy these raps whether you're a churchgoer or agnostic.