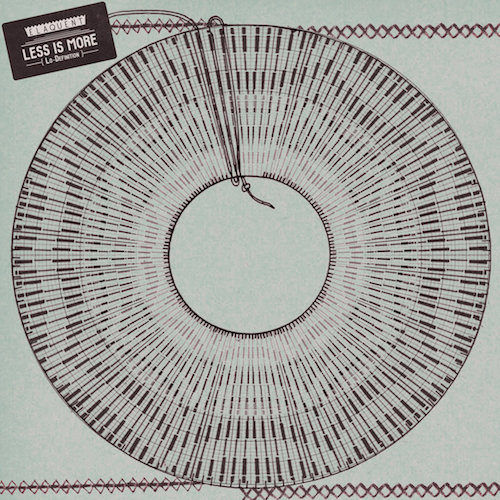 Based off past experience I was looking forward to Elaquent and his "Less Is More (Lo Definition)" album right out the box. He made a significant enough impression on me with an instrumental only album to nearly crack the coveted Nines category, a high stratosphere reached only by the likes of Deacon The Villain among others. There's no doubt that if you're looking for somebody to lace your raps on an album, he should be on your short list of people to call, although he's probably getting so many of those calls that he has to be somewhat selective as to who he works with.

That's why the aptly titled "Less Is More (Lo Definition)" came as something of a surprise. The album certainly lives up to the title. It's 18 tracks long but clocks in at 33 minutes, which means 50% of the instrumentals here are 2 minutes or less, and almost all of the rest are under 3 minutes. The one lone exception to the formula is "Oatmeal" featuring Ivan Ave - that joint is a full fledged regular song at 3:21. That's not the surprising part though! "Featuring Ivan Ave" is the surprise. I got used to listening to Elaquent on his own, but I'm not mad at Ivan for his vocal contributions to this jazzy Soulquarians style track.

In fact I'd go so far as to say Ivan's rap made me chuckle at unexpected times, as he verbally eviscerates rap crews full of "some yes men and some numbnuts" who "play pocket tennis with those A&R testicles." Nasty! There isn't enough of Ivan here for me to really know how he'd hold up on a whole album, particularly if he didn't have Elaquent backing him up on the boards, but he got my attention.

Even though Elaquent opens up his playbook to let a few emcees audible on his cuts, the overall result remains inoffensive. Ivan's performance is the strongest of the three examples on "Less Is More," but J'Von's musical vocal tone is intriguing on "Saul Good." He seems like a cross between Slick Rick and Lupe Fiasco, leaning a little more toward the former than the latter, and perhaps needing a little more polish to be at that next level of dropping an EP, but Elaquent's xylphonic track carries him along nicely.

The album's third and final guest feature gets outshined by the instrumental he's on, as Elaquent chops up the underground world music from Super Mario Bros. in a way I've never heard of or even imagined for the track "Talk Some Sh!t." To be fair though I'm not exactly sure what the "feature" here is doing though since there's no rap on the song, so maybe it was Elaquent providing the instrumental and GoYama chopping up the chiptune? If so credit where it's due for really twisting that s--t in a new and original way. Elaquent may have set the bar higher than he can easily reach on "Green Apples and Oranges," because while "Less Is More" is thoroughly enjoyable I actually found (ironically) I wanted a little MORE. Some tracks seemed like they needed just a smidge extra polish. "Caramel" seems to go on and off beat, and I can't tell if that's by design or an accident in the mixing process, and that confusion means I can't call it a success either way. "The Moment I Feared" was not the Slick Rick tribute I expected, though J'Von unintentionally set up those expectations. The track seems too busy though - flutes and harmonized vocals being drowned out by electronic notes straight out of Pong. "Grimey and New" has that problem too - there's just way too much going on for it to ever gel together nicely.

To some degree this album seems to be a tribute to J Dilla, both in terms of the short "Donuts" like length of the tracks and the repeated use of a sample of him saying "TURN IT UP!" I accept that Elaquent is cut from his cloth and may even eventually reach the heights of success that Mr. Yancey did before he was taken from us so young, but I feel that the results on "Less Is More" show there's still more room for Elaquent to grow in his skill and style. What he needs "More" of now is time to work on his craft.