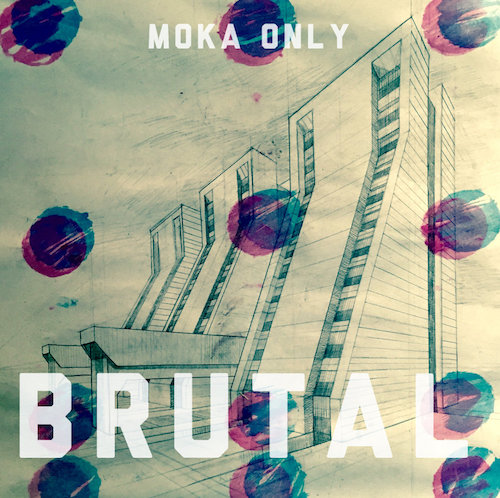 A little while ago URBNET sent us a press release saying that Moka Only would release 12 albums in 2016 - a rate of approximately one album per month. It was clarified that most of these albums would be in digital form only, but given the majority of my Moka Only catalogue exists in that form already, that's not going to bother me as a listener or critic either way. In fact it's sad to say (and a subject for a new editorial on another day) that compact discs have increasingly lost their relevance to me. I'm not above buying a hard copy at a concert to show some love, or a special edition if there's a good reason for it, but while I used to appreciate the permenance of a CD I increasingly look at it as something that takes up space. That's not a problem per se, but if I'm going to let something take up space I'm much more nostalgic for records.

Anyway Moka Only has a lengthy explanation behind the meaning of the title "Brutal" along with an equally long explanation of the recording process, and if you're interested you can read about it in detail HERE. For this review I'm going to concentrate on what I believe Moka's bullet point to be, which is that the term "Brutalism" is in itself misunderstood. According to the Moka Only etymology, the root word was only meant to describe something concrete, not something that's unsparing or unembellished. In crafting "Brutal" he imagined himself as an architect working with concrete, creating hard beats and rhymes in a minamlist setting, building something beautiful from only the most basic elements without unnecessary adornment. "Ya Gotta" seems to exemplify his philosophy.

"Always doin' something like doin' some f#%$in' rapping
Always doin' rapping like something I'm truly rappin'
Moody in the winter like my duty is so massive
Then again it really is I do believe in passion
and holdin on when the chips is in low position
Been here a thousand times, been doin since soulDecision"

Obscure Canadian boy band references aside, what Moka is trying to say is that his commitment to hip-hop is unrelenting, and it would pretty much have to be if you're going to release 12 albums in 12 months. Thankfully Moka is a true talent so he isn't just churning out half baked tracks to meet his self-imposed quota. As he says on "Spacial Concept" it's about "beauty in the brutalism" and his impossible to duplicate style: "you can't put your finger on the method I write." With the exception of Jon Rogers on "We Don't Do Normal," Moka's doing it for dolo here, letting the strength of his musical architecture stand or fail entirely on its own merits. Tracks like "Brutes McGroots" show that he can succeed on his own, as it's a light and playful track where he "ain't worried about these other emcees" because he's "gotta keep it funky and free." Throughout listening to the half hour of "Brutal" it becomes clear that Moka was serious about his theme in crafting the tracks, dropping repeated references to the title and to construction, but not in a way that feels forced or unnatural either. If anybody missed his point though he has very specific tracks like "It's Brutal" where he specifically deconstructs his style lyrically until you understand he's laying up his musical concrete to make "brutalist grooves enough to build pavillion/but really worth a million/with s--t that's real brilliant." Word. I concede the argument that this album could be longer before I'd even attempt to make it, because I know in advance that Moka Only has 11 more albums up his sleeve. Since that's a given there's nothing wrong with "Brutal" being a short but solidly constructed vessel to hold all of his concepts in, much like the "tiny house" fad that seems to be gathering steam in 2016. This album like those modest dwellings has nothing you don't need but everything that's necessary to be functional.