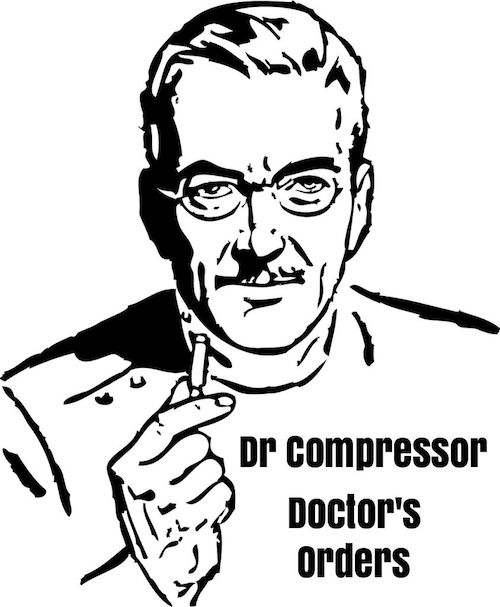 "Abstract hip-hop/instrumental hip-hop from Switzerland." That one factoid intrigued me enough to open "Doctor's Orders" despite the fact hip-hop already has a litany of famous doctors, including no less than two men named Dr. Dre. In fact I was honestly shocked after checking through our review database that we hadn't covered an album named "Doctor's Orders" until now. It seems like such a natural choice for any rapper or producer with "Dr." in their name - but I digress.

Preferring to let the music speak for itself, Dr Compressor a/k/a Yvan Gessler doesn't give his songs any names. The thirty-one minutes of music on "Doctor's Orders" is simply labelled with roman numerals from "I" through "VIII." There's an electronic quality to Compressor's tracks, but not in an unpleasant or off-putting way. Tracks like "II" sound entirely synthesized, but in a way that suggests a natural talent for crafting drum tracks with pop, basslines with thump and layering up instruments in a natural and well orchestrated progression. The only thing the song lacks is a bit more melody - on the other hand if a rapper were flowing to this track that problem would go totally unnoticed.

If there's a theme to "Doctor's Orders" it can't be inferred from the presentation as such. The only theme I can draw is the one I made up myself: "Hello, I'm Dr Compressor from Switzerland, and here are the beats I've been working on for a while." Does he actually need more than that? From a marketing standpoint I'd argue he does, but it doesn't make me enjoy the album less. Take "IV" for example - it's got some chopped up flute sounds that make me think The Beatnuts decided to produce acid jazz. At first it seems to be a formless and undecided muddle, but Compressor gradually brings in the snares and hi-hats, and what at first seemed shapeless coalesces into a snazzy toe-tapper of a jam. He drops out the beat and leaves me on the edge of my seat, then quickly brings it back before I lose patience, then switches it on and off quickly again. Compressor toys with my emotions in a way I can appreciate. There's also a futuristic science fiction edge to tracks like "VII" that suggests Deltron 3030 would be at home on the beats. It feels like lasers are being fired at walls and ricocheting off into speakers, somehow transforming from light waves into sound waves in the process. Somehow it also reminds me of Gang Starr's "Just to Get a Rep" - there's something about the way it bubbles that echoes the hallmarks of that classic DJ Premier beat. Owing in part to its experimental nature and in part to the fact that some tracks feel like they just needed "something more" to be complete ("V" comes to mind) I can't be too effusive in my praise of "Doctor's Orders." If Dr Compressor has both a strength and a weakness it's that he finds elements that sound good over beats, then sticks with those elements come hell or high water. The funny thing is I can see the good foundation that Dr Compressor has being taken and used by others. These beats could be flipped at higher speed for techno or dance, or could be scratched over by a turntablist to show off a funky routine. Wait - I guess that's the "something more" that I'm looking for. Dr Compressor shows off a very competent mastery of beat production basis - but what he really needs is a musical partner who can progress his craft further. Some Doctors need an Ed Lover to be complete. C'MON SON!