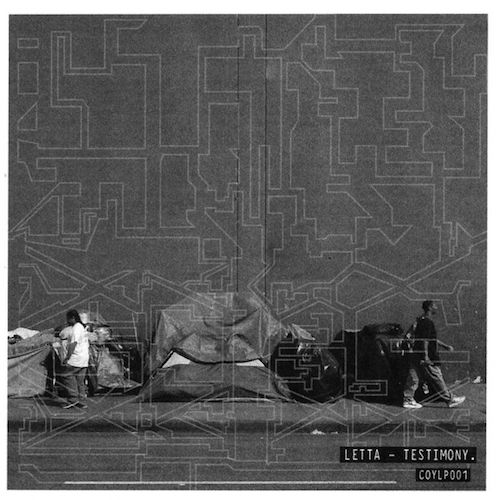 The titular testimony in Los Angeles-based grime producer Letta's debut album is his struggle with heroin addiction. In interviews he's talked about how his late teens and early twenties were spent shooting up every day. He also attributes his music to helping him get through those dark times. Now, seven years sober, "Testimony" is a gorgeous and haunting document of the six years Letta (born Tony Nicoletta) lost to the drug.

I found out about Letta's backstory after listening to the album repeatedly for a week after hearing it mentioned on someone's year-end list. I was immediately captivated by it. It is a inventive album that melds minimalist beats, mechanical noise, and R&B. A song might be constructed around bleeps and whirrs, with some hi-hats and synths holding the whole thing together. Wordless female singing adds an aura of haunting beauty to songs like the aptly named "Ghosts." Those same wordless vocals are paired with synth whines and backwards keyboards on "In Black." "Polar" spends its entire four-minute running time with just electronic pulses, clacking percussion, synth whines, adding in a little more keyboard to build tension. The mechanical whirrs and whines end up becoming part of the melody. It's beautiful, but it also conveys a sense of loneliness.

What makes "Testimony" stand out is that it manages to be experimental and minimalist and play with composition and sound design while never forgetting the low ends that frame the tracks. It isn't a relentlessly beat-driven album, but it also feels more grounded than some of stuff coming out of L.A. in the past few years. The fact that the album is a thematic whole also makes it stand out. This isn't a collection of tracks, it is a statement. You may not be able to guess which stories go with which track, but there is a cohesiveness to the album.

Letta reminds me of two artists, both of whom are British: Burial, who also constructs intricate, R&B-tinged soundspaces, and Aphex Twin, who is a master at deconstructing sound and playing with composition. That's lofty company to put so new a producer with, but I think he deserves it. "Testimony" is an incredible album. Music Vibes: 8.5 of 10 Lyric Vibes: n/a of 10 TOTAL Vibes: 8.5 of 10