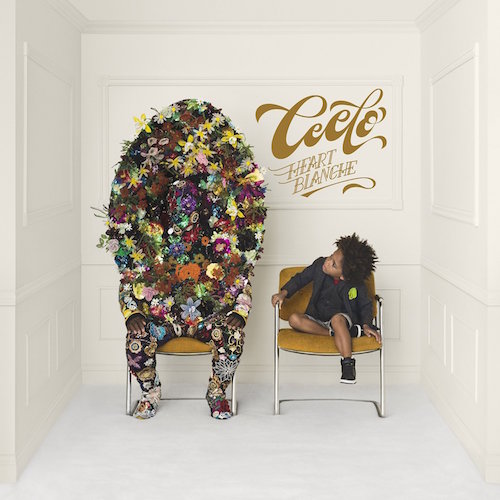 I have a confession to make - I've been avoiding reviewing this album. Over the years I've been an admirer of CeeLo Green's work whether as a member of Goodie Mob, Gnarls Barkley or as a soloist. I found his lyric writing whether rapping or singing to be highly personal. He wasn't afraid to bare his soul in his music, and there's nothing more satisfying for a critic OR a fan than an artist who is willing to take you on an emotional ride. Whether it makes you want to laugh or to cry, to dance or to scream in anger, art that makes you FEEL is the greatest thing you can experience. It can even bring humanity closer together. We may come from different walks in life, but through art we can walk in someone else's footsteps together, bridging the divides that exist between us.

Was I putting too much importance in Thomas DeCarlo Callaway's music? Probably. Therefore I deserved the smack I got when CeeLo implied date rape was ACCEPTABLE after having taken a plea to avoid jail time. It was a complete betrayal of everything I believed Mr. Callaway represented - a progressive, positive, and perhaps even spiritual aspect of his music. Yes he had said some bitter things on songs like "F#$% You," but who among us hasn't spoken ill of an ex when a relationship went from sweet to sour? I could understand him speaking out of hurt and even relate to where he was coming from, but CeeLo crossed a line from relatable to regrettable. There's never been a recorded instance in human history that rape was acceptable. NONE. "I'm married so I deserve it." Nope. "We were both drunk." Nope. "I'm rich and famous and she clearly wanted a piece of it." NO, NO, AND NO. I don't care what excuse, circumstance or bulls@$t justification you come up with. Mr. Callaway later apologized for what he said but in my view the damage was already done. I no longer respected him and worse I regretted having ever LIKED him.

Over a year has gone by since CeeLo pissed me the f@$! off so I've had some time to calm down about it. I still don't forgive him, and I won't ever forget what he said no matter how much he apologizes, but I'm finally ready to deal with "Heart Blanche." Even a few months ago when CeeLo dropped this album on November 6th I still wasn't ready to deal with his s#$t, but I can finally handle it. Unfortunately the irony of the album strikes me right away on the song "Robin Williams." I understand he wanted to pay tribute to Williams, and in doing so he also references other actors and comedians we lost due to their personal demons, but when he sings "we've got to laugh the pain away" I'm not really prepared to do that yet. Surely the woman he forced himself on and later tried to feign innocence on assaulting is not prepared to yet and may never be. "Robin can you hear me?" quips Callaway. If he can I hope he responds "Yes - and for God's sake please leave my name out of it."

I want to give CeeLo a fair chance though. I'm trying really hard to do that. Let me give you some of the positives about "Heart Blanche" that will last beyond my queasy feelings - call them the "antacid tracks" if you will. One such song is "Better Late Than Never" - it's the CeeLo I know of old, soothing and grooving over a funky Jack Splash track that's pleasantly 1970's Elton John in its construction. This is soft rock meets hip-hop and it works so well, especially with the slight hint of echo layered into the recording of CeeLo's vocals. "Sign of the Times" has an idea that Souls of Mischief once tried to use on an album but couldn't afford the clearance for - sampling the Bob James "Angela" song that most people my age (or older) remember as the "Taxi" theme song. Obviously Mr. Callaway has deeper pockets, but the compromise is that James gets a co-writer credit and a share of the profits, as well as a hook and song title that references one of his most famous hits.

At times I feel like CeeLo was trying to take inspiration from Suzanne Collins. He references the late Philip Seymour Hoffman on one song (the aforementioned "Robin Williams") and he has three songs that would all fit into her novels - "Smells Like Fire," "Thorns" and "The Glory Games." I suppose if you've run out of inspiration it doesn't hurt to borrow a little from other sources, and when I put all of my feelings about Mr. Callaway aside that's the impression that I'm left with. Back when "The Odd Couple" dropped CeeLo sounded highly motivated, really pouring himself into each and every bar that he crooned, and that carried forward for a while even when he wasn't working with Danger Mouse. There was a gospel sincerity to his music even without a church or a choir -- and that makes songs like "Mother May I" all the more troubling. He tries to purposefully make the most gospel song he possibly could, and instead of sounding sincere he sounds like he's going through the motions. "I need your, your blessing/because your baby was born to be out of control/you will help me, make it home safely/but I'm still not sure if I want to live to be old." Nor am I listening to this insipid track.

It's impossible for me to not feel snarky again when he croons "I've been a good boy; I'll never bring you shame." Huh. The best I can say for CeeLo Green on "Heart Blanche" is that like with his Twitter account, he can be his own worst enemy at times. Normally I like albums to be about an hour long, but this one feels like it could and should have been 15 minutes shorter. "Music to My Soul" just isn't, and "Tonight" just makes me yearn for "Tomorrow." He still has a lot of talent, he just needs to reign in his creative impulses (along with a few others) to make a better album next time.