Your Old Droog :: The Nicest 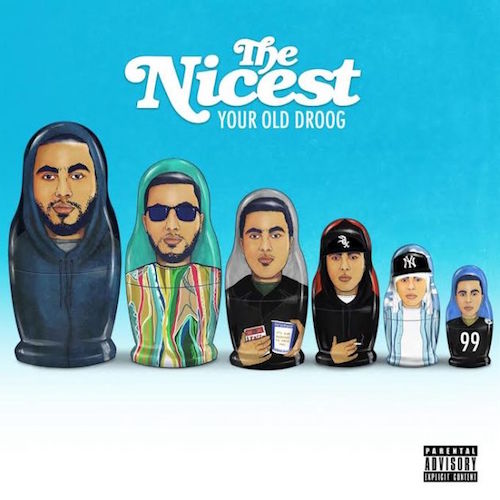 The first time I really remember taking notice of Your Old Droog was hearing him freestyle a track called "Free Turkey" to the same loop that Q-Tip gave Nas for "One Love" well over 20 years before. I was initially ready to cry foul saying that this cat could have come up with something different that Jamaal and Nasir had already made classic, then I noticed Droog and whoever produced for him pulled a different part of The Heath Brothers and flipped it a little different -- a little more extended. It was almost like he straight rapped over the original song and not a break. Aight - it's not a straight jack - I'll give Droog that. Then I really dug into how he was spitting the bars. His vocal tone was compelling, his snaps made me laugh, and there was a charismatic presence that reached out through the speakers and grabbed me. "Free Turkey" made me a fan of Your Old Droog even though I knew absolutely nothing about him at all.

Fast forward to "The Nicest" and I've learned a few things about Droog in the interim. His family emigrated from the Ukraine to the United States back when Gorbachev and his cronies was still locked in a cold war with Ronnie and his buddy George Sr. The wall fell, everything changed, but Droog and his fam were living the Brooklyn life and for all intents and purposes you'd be hard pressed to distinguish him from a fellow Brooklyn rapper. In fact the whole "One Love" coincidence wasn't really a coincidence at all, since early conspiracy theories about who this hot new rapper was were convinced he was an alter ego for a frustrated major label artist who wanted to get his product out. Now personally I don't think Droog SOUNDS like Nas in the least. He gets compared to a lot of other New York artists, but if you absolutely have to compare him to someone I'd split it in thirds - the deep richness of Tragedy Khadafi, the gruffness of R.A. the Rugged Man, and the humor and timing of Method Man. I wouldn't say he's a good match 100% match to any of them but again people say he sounds like Nas and to me it's not even close. Droog is his own animal.

"As long as I'm cakin and can afford to go on vaacation
I care less if I'm boring in a social situation
Who wants to be the life of the party or afterlife of the afterparty?
And I don't make music for no party
This for my dudes and chicks who got it 2006
and got buried in Ed Hardy"

Droog's matter of fact flow on "We Don't Know You" is instantly appealing. "I don't make music for mass consumption/Why you got that make-up on - you maskin somethin?" He's relentlessly poking fun at poseur emcees trying to act like they pull triggers and pop champagne who in his view don't shoot off either, but keep up the act trying to impress people. It's the very fact he doesn't want to please people that makes him pleasing - go figure. He turns snorting coke into a metaphor for the music industry on "Through the Nose," cleverly implying that he's good enough to be consumed like an addiction - and that anybody wants to sign him to a label will spend that much money or more to ink him. "Now I'm sober and the fans got the sniffles y'all/with holes in their nasal canal like a wiffleball." It's the punchlines like that which give you Kool-Aid smiles when Droog is spitting. He also caught me out by dropping mad pro wrestling refences on "Listen," but the obscure one really surprised me: "If I ain't gettin dollars/gorilla bodysuit, with the airbrushed muscles like Giant Gonzalez." WHOA.

"The Nicest" may seem like a premature label to slap on Your Old Droog at this point. He's young in his career and hasn't quite shed the comparisons to other better known New York emcees from the fans or the critics. They all seem to like Droog, but can't make up their mind exactly what he is. There's no doubt that his flow, his slang usage, his general accent are as New York as it gets - but yet people are trying so hard to pin down who he reminds them of I've seen him compared to everybody from The Game to Rakim (the former a little bit maybe - the latter not even close). I think once he drops a few projects longer than "The Nicest" (this one's barely over 21 minutes) people are finally going to get over the comparisons and just accept Droog is Droog. I'm enamored with the vocal tone and the seemingly effortless way he drops bars and snaps. To me what he "sounds like" is a second or third generation rapper who grew up listening to his predecessors LIKE Rakim and Nas, then decided he wanted to go from being a student of the rap game to applying those skills to his own flow. He pulls it off nicely.