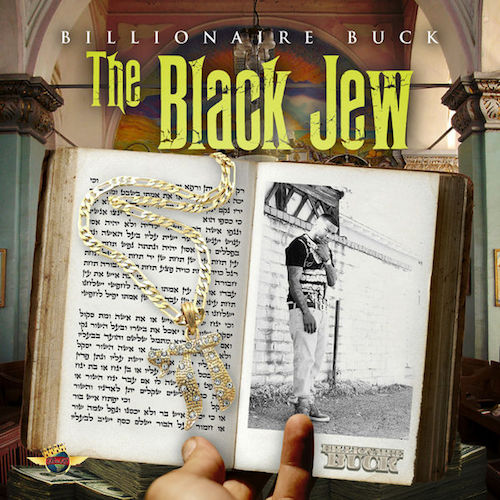 Definitions have changed a lot over the years. To me growing up an "EP" was never more than 6-7 tracks and about a half hour long tops. It was theoretically supposed to be a cheaper price than the longer playing "LP" albums, but retailers often didn't make that distinction. I remember paying full price for Digital Underground's "This Is an EP Release" even though it was right in the wheelhouse of what I'm talking about - six tracks and 33 minutes long (and really "Arguin' on the Funk" was padding out the length).

Anyway Billionaire Buck's "The Black Jew EP" is 13 tracks and almost 45 minutes long, but since I'm not copping this one at MusicLand or Tower Records (if we're going to reminisce might as well throw some defunct stores in the mix) it's not being sold to me at full price. In fact it's not being sold at all - "The Black Jew EP" is entirely free on DatPiff - and free is a price that I ALWAYS f@$# with. Shout out to Buck for giving this one away, although like any DatPiff release or free mixtape there's an ulterior motive. Giving away your music for "free" is actually designed to get you something back that's worth money - people buzzing about your music on social media and sharing it with their friends. The Block Ballin tribe decided this was worth more to them free in the pub they'd get back - like this review.

I don't particularly enjoy s#$#ing on anything someone gave away for free, so I'm going to endeavor to highlight the positives, but I'm reminded of the old cliche "It's worth what you paid for it" as I scan through this album. An obvious highlight is the song "True Player" with E-40, but after a little bit of search engine research it appears this song is a year old and actually credited to Young Lawless with features by 40 and Buck. Since they all have about equal time on the song you could just as easily credit it as "E-40 featuring" especially given his verse steals the show. "I got some s--t that'll split the fo'head of a dinosaur" brags Earl. Who's going to top that? Not Buck nor Lawless.

Owing to the mixtape performances a lot of credits are incomplete or left out. I'd like to know who the woman is singing the hook of "Rich Before I Die," one of the other highlight tracks, but there's nothing to help. I don't hate anything about Buck's work here except perhaps for the misogynistic connotations of the line "You b----, where your Kotex nigga?" The topic matter has been done to death and he even admits it in the song: "Everybody wanna be rich - I know!!" Okay then. As long as we're on the same page I'm cool with the hustle because we'd all like to be better off than we are save perhaps for Bill Gates, who has so much money he's spending the rest of his life just trying to give it all away.

Something that does need better explanation though is the "Black Jew" concept in general. He offers one on "The Black Jew" and it's not really satisfying - he says people started calling him that so he started calling himself that. Really? Once you hear the money machines counting bills in the hook, and Billionaire Buck keeps making "cha-ching, cha-ching" sounds, it seems like whichever friend(s) started calling him "Black Jew" were referring to the stereotype of Jewish people either being greedy or wealthy. This idea was so potentially explosive that Jadakiss once had the line "You should do what we do, stack chips like HEBREWS" censored out of the song "It's All About the Benjamins." That was almost 20 years ago - and that idea isn't supposed to still be offensive in 2016? Did we all forget that? I'm not even advocating censorship - just the point it's an uncool stereotype that a lot of people aren't going to like.

(Incidentally if you try to Google "black jew" to find this album some of what comes up isn't that cool either. You might just want to go directly to DatPiff to avoid that mess.)

Back to Billionaire Buck's music on "The Black Jew EP" though. "I was stuck on the block tryin' to pay bills/niggaz wanna seem me stuck on them trainin wheels" vows Buck on "Run It," one of many tracks about his never ending quest for money. "Even rich niggaz out tryin to get (more) rich" offers Buck, as though the pursuit of money is its own justification, regardless of what you have to do to get it. If there's something deeper to Buck I can't find it here. "Dat Us" has him bragging about being the life of the party, with chopped up samples of "money money money" reinforcing you'll need lots of cash to pay for all that weed and alcohol. "Dat cheese? Dat us." I think we get it bruh. At least "Came From Nothing" offers some perspective on why he's so hungry for green - he grew up in poverty and it fueled his desire to get overcome his circumstances. Unfortunately the awful T-Pain imitator on the hook kills any buzz I can get off the track, as does the Fetty Wap style singing in the second verse.

The surprising thing here is that even though I probably seem negative about "The Black Jew EP" on the whole it's far from the worst hip-hop album (and it really is an album's length) that I've heard in the last 12 months. There are times when Buck's bravado is admirable and even amusing such as on the song "That's Gangsta" when he raps "Got the whole hood mad - F@!$ IT, they upset!!" The unnamed producers who aren't credited, whether original or borrowed, provide a bettr than average musical backdrop that you can cruise to comfortably. What Billionaire Buck lacks in substance he at least partially makes up for in swagger and style, but my own recommendation would be to shy away from the "Black Jew" concept and go in another direction.