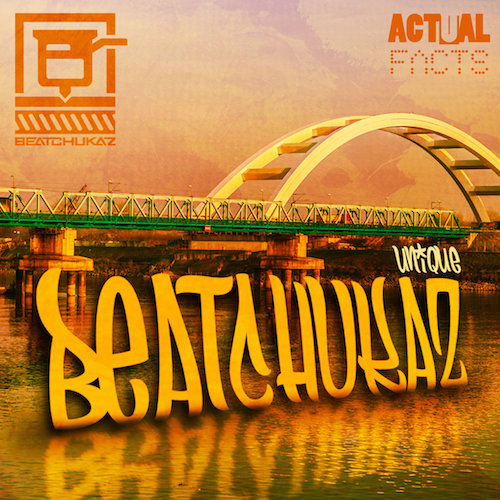 As much as I state that hip-hop is a global phenomenon and not a local one, it may be a telling fact that we set aside a "UK Month" at RapReviews, specifically to encourage us all to think globally and not locally. Even that well intentioned idea seems like it doesn't go far enough to me. Wouldn't a "France Month" be equally deserved? I know there are enough artists for a "Japan Month." We cover Australia and Canada regularly without setting a whole month aside for them. Perhaps it's just cultural bias because we all speak English, North American and UK rappers alike, but I still chide myself that we don't do more to address the global diaspora that is hip-hop music.

The Beatchukaz have provided me at least temporary relief from those concerns. The Serbian production duo of DeeJayDee & Zupany are according to their press release quite renowned for their work overseas -- ten year veterans who are "continuously touring with their basic HTc band (while) mostly perfoming in Balkan and European clubs and festivals." Obviously somebody decided it was high time to export a sample of their work to a wider audience, and that someone is Actual Facts Records, electing to distribute the "Unique EP" through Bandcamp. More artists need to take advantage of this outlet. Even if you only sold one Bandcamp copy that's still "found money" compared to no money at all. They're asking 4 Euro for the "Unique EP," which at today's conversion rate is less than most venti drinks at Starbucks.

Calling this an "EP" is a bit misleading though. I'm sure that discussion is getting old and maybe it's me who needs to change definitions as opposed to everyone else, but nine tracks which average out to three minutes each feels closer to being an album than an EP. I suppose being under a half hour total they felt it necessary to define it this way, but it's quite deep for your four dollars and change. All of the music and scratches are done by the Beatchukaz themselves, but they did invite some friends to jam with them. You can hear Ivan Blanusa playing sax on several tracks including the funky head bopping ditty "Hurry Team."

It reminds me of Digable Planets and Us3 for all of the right reasons - jazzy, upbeat and smooth as silk. They do get a little more rugged elsewhere. The title song of "Unique" has mournful wails like a train whistling down the track, audible audio reversals, and an unexpected but pleasant drum break right in the middle. If there's a hip-hop jazz equivalent of "freestyling" this is it. At times when you received a hundred press releases a day full of hyperbole, all promising you their artist is the greatest thing since sliced bread, the Beatchukaz didn't oversell their credentials and probably could have bigged up their work a little more. Here's an odd example I think might help explain why I enjoyed "Unique." I've been to the San Antonio riverwalk a couple of times, and given they have a very lax policy about open containers (just don't be a sloppy mess) it's easy to walk around and enjoy the atmosphere. Occasionally live bands will just start singing or jamming, and if I heard one playing like the Beatchukaz do on "Proper Pack" I wouldn't keep walking - I'd stop and sit for a spell to nod my head to the beat and enjoy the vibe. You'd honestly be hard pressed to know this was a Serbian duo on tracks like "Mo Fillz" if I hadn't told you that at the outset - the scratches and samples are as much North American, Australian or Canadian as they are anything else. That suggests the fundamental truth here is that no matter what their origins are, the Beatchukaz appreciate the fundamentals of hip-hop, what sounds good and works right in a song. I know you probably hate doing the conversion math but trust me, turn those dollars into Euros and "Unique EP" will be worth it.