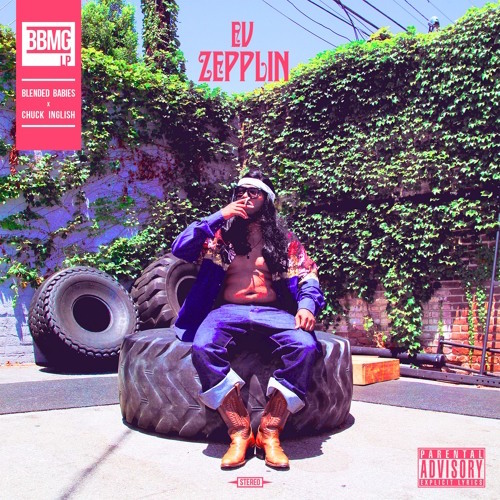 EV Zepplin are Chuck Inglish of Cool Kids fame and Blended Babies. Blended Babies are a production duo who have done work for Freddie Gibbs, Anderson Paak, Chance the Rapper, and Ab-Soul, among others. They are also incredibly prolific. If my count is correct, this album is the second album they've put out in April, and comes after six EPs released in the past 11 months. That doesn't even count the tracks they've produced for other artists, or Blended Babies member Jonathan Keller's solo project.

Blended Babies' take a musical approach to hip-hop, combining elements of rock, R&B, and electronica. Two of their recent projects have been with singers (an EP with Anderson Paak and an album with indie/R&B artist Jake Barker). They are more songwriters than beat makers, and the songs on "EV Zepplin" all feature as much singing as rapping.

Not that the rapping gets short shrift. Besides Inglish, Alex Wiley, Caleb James, Boldy James, Asher Roth, A$ton Mathews, and Drew Smith all provide bars. The surprise for me was Asher Roth, a rapper I had written off after the frat rap of "I Love College" seven years ago. He reinvented himself as a more psychedelic rapper on 2014's "RetroHash," and he continues on that tip here, rapping about tripping on "Hang Up," and offering some blunted menace on "Gun."

The album is at its best when it is riding a blunted groove. Songs like "Scenic Route," "Hang Ups," the reggae-inflected "What I Want," and "Over Much." are highlights, offering up a hazy combination of piano, guitar, and banging drums. Sometimes Blended Babies' bombast misfires. Opener "We On" combines buttrock guitars with lame sex lyrics, and the result is best avoided.

Lyrically, EV Zepplin sticks to getting high and bragging. Things get romantic on "Re-Creating" and "What I Want," although both tracks are more about how the woman can please the man rather than vice-versa. The lyrics may lack depth, but they are delivered with skill, and you can tell that the MCs were having a good time recording this. "I'm rhyming like I'm Gryffindor, you rhyming like you Hufflepuff," raps Asher Roth on "Gun," which gives you a sense of where the rappers are at.

EV Zepplin may have nothing to do with the classic rock band that inspires their name, but it is a well-executed dose of psychedelic rap. Inglish has found worthy collaborators both in the Blended Babies and the MCs and singers that round this album out.